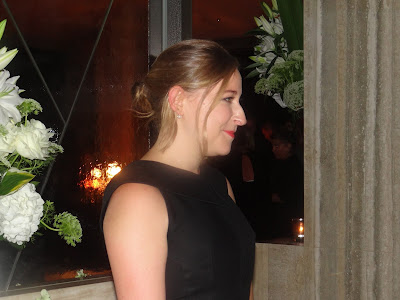 Sophie Von Haselberg is making quite a name for herself in Hollywood. This talented and personable young lady has had roles in three feature films and her role in Equity, the story of a female investment banker who takes a company public, is sure to put her on the road to success.

Sophie, the daughter of  the legendary Bette Midler and Martin Von Haselberg has taken a circuitous path to stardom, That journey started at Yale University where she majored in Asian Studies and sociology, brought her to China where she worked at an ad agency and then back to America to pursue acting.

In her role in Equity, she plays the outspoken Marin, a sharp, savvy coder who seems to know the real deal at Cachet, the company that's going public.

In this interview, Sophie shares more about how she's ending up in movies, as well as what movies she chills to.


Tell me about your role in Equity. Why were you drawn to it?

​Sophie: I love that Marin is sort of an outsider who is so damn good at her job that she doesn't feel the need to play by the same rules as everyone else, in particular because she sees through the egos of the people she's surrounded by. She finds herself in a tough and, I think, very unexpected spot -- I wish we could see where her life goes next!

Do you have friends like your character Marin that work in tech companies? How cool was it that this movie features a female techie that really knows what's going on?

​Sophie: I actually have a lot of friends who work in tech out in , so I feel like I got to play in their shoes for a few weeks. Needless to say, their coding abilities are far superior to mine.
​

Did your mom (Bette Midler) want you to be an actress? Or did she stress education over all?

Sophie: ​I feel incredibly lucky that ​my parents put such a huge emphasis on my education. My mom, in particular, was averse to me going into show business, so I was constantly forcing myself to explore new paths -- at various points in my life I thought I was going to be an astrophysicist, an architect, an editor... The list goes on.

You took a different career path, got a degree is a traditional career, worked, then went back to school for drama. First, what was it like working in ? Do you speak Chinese?

​
Sophie: I studied abroad in while I was doing my undergrad, and then I moved there after graduating to work in advertising. I was so, so taken with living there, getting to use my Mandarin every day, surrounded by the extreme hustle and bustle of Chinese cities, this constant feeling of exploration and adventure. It was absolutely one of the most formative experiences of my life. ​

Second, what made you realize that acting was really what you wanted to do?

Sophie: ​While I was living and working at the ad agency in , I was constantly coming up against these thoughts about being an actor... And I finally had to confront them. ​

​There was something about being halfway around the world from everyone I knew and their expectations that allowed me to finally say, "Fuck it. I have to at least try." ​

What would your dream job be, Broadway, movies, TV?

​Sophie: There are so many roles that I hope to play, and people that I hope to work with, and I feel extremely lucky with what I've gotten to do so far​. There are definitely a few Shakespeare parts that I hope to God I get to play before I die -- Margaret (in Henry VI parts 1, 2, and 3 and Richard III) is a big one for me.

Favorite show to binge on:
Too many, House of Cards, Silicon Valley, Veep. I thought this season of Girls was absolutely genius.

Favorite movies of all time:

Clueless, Some Like It Hot, and the original version of The Producers with Zero Mostel and Gene Wilder

Favorite fast food item:
​ A burrito from Chipotle with Guacamole (yes I know it's extra, yes I still want it. )

Actor you'd love to work with in a romantic movie:
Too hard to narrow that list down.

To see Sophie in Equity, find a theater near you at
http://sonyclassics.com/equity/
Email ThisBlogThis!Share to TwitterShare to FacebookShare to Pinterest