Behind the Scenes Look: A Visit to Yankees Spring Training 2014- Exclusive Video of CC Hitting Grounders to His Son and Mark Teixeria doing BP at George M. Steinbrenner Stadium

It was the first day for Pitchers and Catchers to report to Yankees Spring Training in Tampa, Florida. I had gone to dinner with my brother-in-law, Jack Curry of the YES Network, the night before, and he invited us to stop by the next day, prefacing it with,  "Even though there won't be much going on".

I had never been to spring training, but the first thing that impressed me was the size of George M. Steinbrenner Stadium and the grounds. The stadium itself, according to Jack, held ten thousand. It also just got a new scoreboard which was quite impressive-looking. There was a field to the right of the stadium and another on the left, closer to the 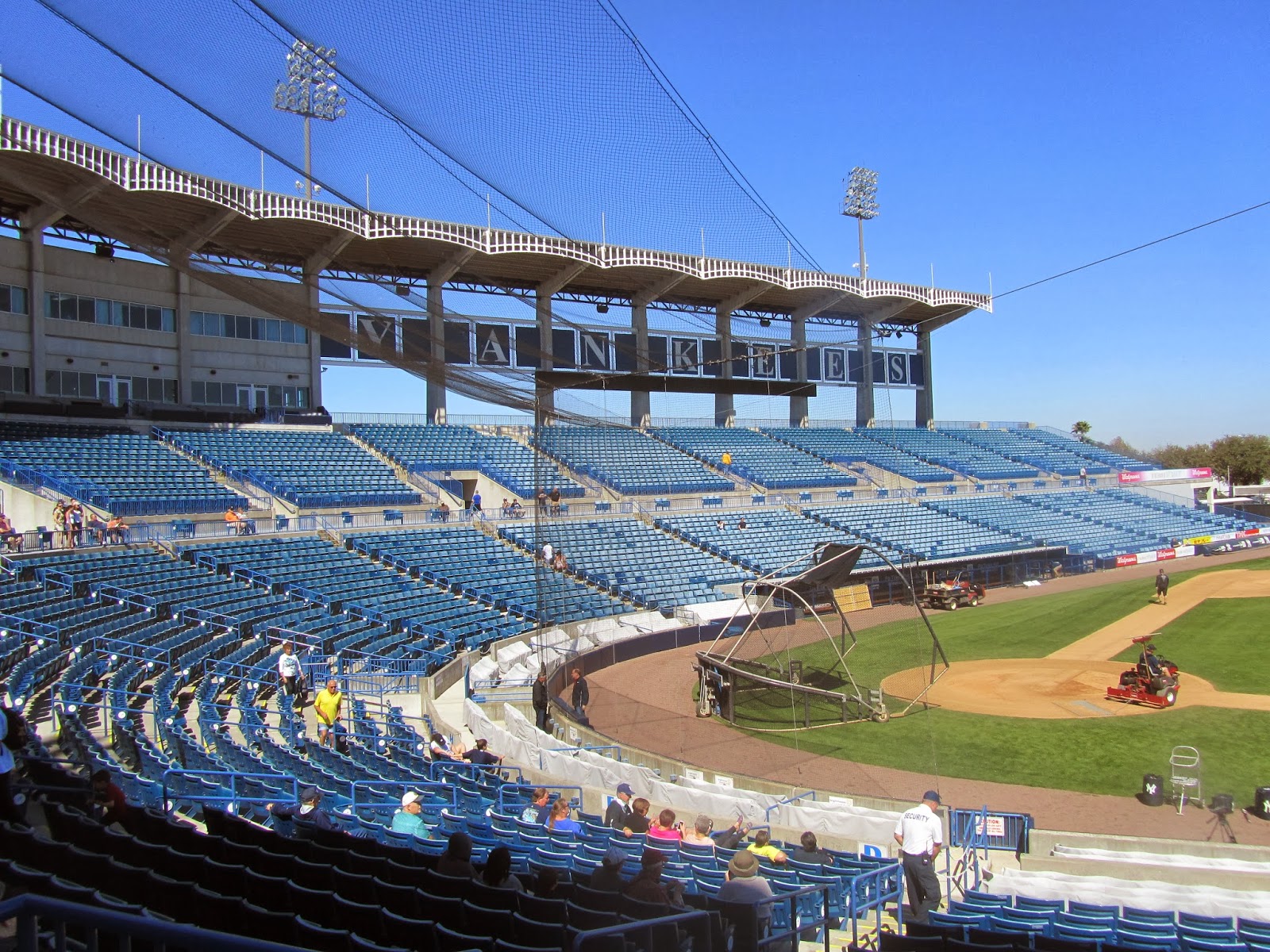 Buccaneers football stadium down the road which was clearly noticeable amidst the tall palms. The grounds were well maintained, with flowers and plantings using Zeriscape landscaping which was proudly noted on a sign. There were rows of tall palm trees adorning the stadium. There was a pond with a water feature with lots of ducks on it.

When we entered the grounds it looked like the crowd of about a hundred or so was walking from the stadium on the right, where it looked like some team members were just doing some exercises, to the main stadium. Jack had texted us that he was in the dugout on the main field behind the first base line, so we went in and he came out at sat with us.  Jack said that there will be twice the crowd there when Jeter comes, saying "he's like a magnet".

Jack is a bevy of information and I couldn't keep up with all the Yankee talk he was talking. I was more interested in what was going behind the scenes at this stadium, in beautiful, sunny and warm Florida. Yes it was spring down there, though it was really the first warm day in quite some time down there this winter of 2014. The reporters and players still needed jackets, even standing in the sun. Temperatures in the Tampa area that week were in the 30's at night, maybe reaching 60 during the day. But it was a far cry from the  2 feet of snow on the ground and 10 degrees in the New York area. Yet, little known fact that during World War II Yankees spring training was held up North, in Asbury Park in 1943 and Atlantic City in 1944 and 1945. They won the World Series over the Cardinals in 43- so the Jersey shore breeze surely did them some good that year.

There were about a dozen reporters there and a little less than that of cameramen. Jack said more come as the team gets there. Jack said there were a few new guys from the Star Ledger. Meredith Marakovitz was there. She travels with the team. Bob Klapisch was there from The Record. Jack said there were twice as many Japanese reporters this year as last year. He said he felt it must be tough for them to have to live in this country and just follow three players around. He also added that  Masahiro Tanaka only understands the basics of English. He uses a translator and is a man of few words. There was a box truck parked outside which was the base for the Japanese reporters to send back their feed.

I asked Jack where he ate and he said that there was a lunchroom for reporters and such and that the food was pretty good but you had to pay. For spectators, there is the Yankees Pavillion at the field to grab a bite.

Mark Teixeira was doing some batting practice on the field. The minor league coach and others were pitching to him. Jack said that "anyone that gets the ball over the plate can pitch at spring training." Here is the video of Teixeira doing BP:

I saw him  batting for about a half hour. Then stadium personnel starting lining people up down the row, presumably for autographs. However, Teixeira left out of another row. I saw him point and then, much to a little boy's surprise, he gave his batting glove to a kid.

After he went in, the reporters followed. Jack had to go and said he had to line up his questions for the night's show.

The crowd pretty much emptied the stadium. When we got out we saw people standing at the fence by the field on the left, so we went over. We were treated to see a very slimmed down CC Sabathia there doing BP with his son. All the buzz was about how much weight he lost, I think 40 pounds. The guard there was
keeping people back from the part of the field he was in, which was the outfield, but I think now it was more so that no one got hit by a ball. Here is the video:
http://www.youtube.com/watch?v=nvLPB73YnsE

At one point his son asked him to do pop-ups. He said "I can't do pop-ups". But, for the next ball or two, there were pop-ups, because that's what good dads do.:-)

We left after about ten minutes. We heard that when CC left he signed about a dozen autographs.

On the way out we looked at the signs that adorned the front of the stadium. There was a plaque and a little history on each of these Yankee legends. In a clockwise motion, there were plaques for: 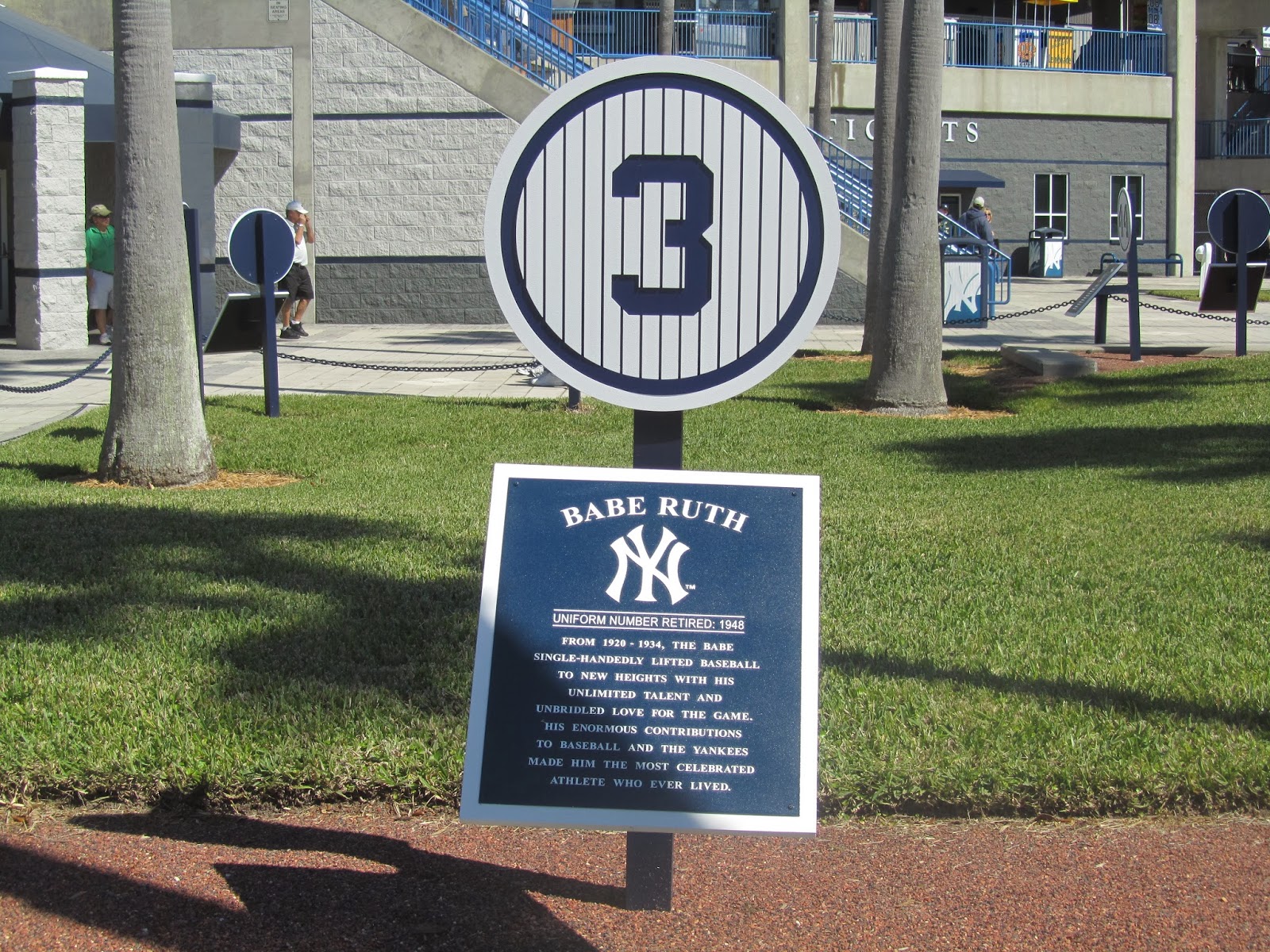 When I had left Jack, I said something to him about how nice it was to have a job in a place like this. He responded,  "It is a lot of work, you know". I know that, but it sure beats sitting in an office in Jersey.