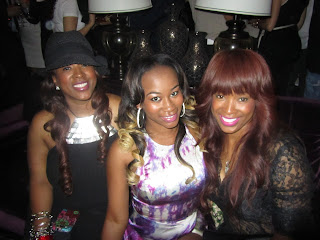 Sitting next to Sharlinda Parker, Kahdijiha and Sabrina "Brie" Rowe was like chatting with a bunch of girlfriends. They were warm, personable, open and fun. Definitely  people that you would want to hang out with.

Of course, meeting anyone for the purpose of an interview is different than meeting them for a different reason, but I am a pretty good judge of character from being on this planet for so long, and these ladies were genuine. We were at the same event in NY with Perez Hilton and they were happy to talk about their new show.

Because there are so many ways of getting on a reality show, my first question was, "How did you get on the show?" (And check back soon for my post, "How to Get on a Reality Show"). Their answer was what I had been finding lately: Kahdijiha said they were personally asked. This seems to be how a lot of people are getting on shows as of late.  This could be because producers are more particular about what kind of person they want for their show; perhaps they want to bring something new to the table or to duplicate a successful model. However, I have heard of many people turning down being on a reality show so I also think casting has become more difficult and specific.

Kahdijiha said that she had been recommended by people in Atlanta to the producers, "because they knew us and they knew my dad." She said, "My dad was an popular R & B singer from the R & B Band 112 (Quinnes "Q" Parker). "

I asked her how it was all going.


She said, "I love being on the show because I get to work with my mother and my aunt. We all are business owners." Then we all chatted about how great it was to see women business owners on TV.

I had not watched the show yet when I met them, but it just started airing January 23, 2013. These ladies were very positive and I do find that there are always aspects of the true personality that shine through no matter how hard they try to portray themselves as someone else. When I tuned in to  the show I could see that the ladies were playing themselves,  which is what they told me. Sharlinda said, 'What you see on the camera is real. You can't be happy all of the time, so you see the good and the bad, but we all rock on.".

The show is pretty good. In addition to the three I met, other cast members are likeable as well. Harvin, Virginia and Meyer were also at the same event looking fabulous.  I watched a few episodes and there wasn't as much high drama as on the Real Housewives franchises but I am sure there is some to come. It airs on the Style Network. Visit www.stylenetwork.com for details.