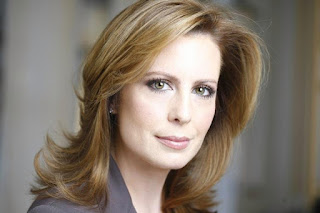 Martha was part of the As The World Turns cast for almost two decades. She grew up on the soap and is a respected actor and producer in the industry.  After ATWT went off the air, she put together her own "soap" on the Internet. This continuing drama, called "Gotham" is in the process now of production for broadcast TV as well as multiple digital platforms. With the resurgence of some popular soaps, and now the recent news that the OWN Network will now show them, Martha's show is at the forefront of the new wave of popularity for soaps.

SBTS: What are your fondest memories of being on ATWT?

I specifically remember my first day. I was not the first actress to play the role of Lily. I was chosen from my original audition six months prior when the actress who was chosen left abruptly. I was called on a Friday to start the following Monday. Who knew I would stay for 19 years?? There are so many wonderful memories, but at the end of the day, it's the family aspect of the job that stays with me. There is no other job like it in the world. When you do a film or TV series, it ends after a few weeks or in rare cases, a few years. Working on ATWT brought a lifetime of relationships which are very intimate and stay with you. Over the 19 years on the show, I got married, had three babies and won a few Emmys in between. It was a great ride.

SBTS: What inspired you to create your own series for the Web?

I wrote an hour pilot script for Gotham in 2007 and shopped it around to different production companies for television broadcast. At that time soap operas were on the downslide. No one wanted to touch it. As a member of that community, I knew where it was failing, I was living it. Elements of the genre weren't being given the attention needed to survive, from a creative prospective. You must do what's good for the show for the long haul, not make a quick decision that could impact the institution of these shows for years. Daytime shows used to have a Bible of six months of story, carefully mapped out, that disappeared. Shows would tape two-three weeks in advance when they were thriving, so if a story was tanking, it could be fixed. Due to the desire to save money, shows began to tape two-three months ahead which created the obvious problem. It was cost effective, but created other challenges. Just a few examples of what was trending at that time. The audiences voiced their frustrations by tuning out.  They want smart, thought provoking stories and when you don't respect that, you're doomed. I wanted to produce a show that was story driven with great characters that gave the audience a playground of thought. After a few companies passed on the show, Lisa Brown said, "Let's do it ourselves for the web."

SBTS: What was the most fascinating aspect of putting together your own show on the Web? The freedom to do anything you want? The ability to produce content and deliver it quickly?

The best part of doing a project for the web at that time was the freedom to learn. It was still considered artists just messing around on the web, because there was no money to be made in the eyes of the industry. We knew it was the only medium that would embrace what we were doing and watch. I didn't want to just talk about making something with integrity, I wanted to see if I was right about producing something at a reduced budget without sacrificing quality. I learned quickly what worked and what didn't, so now moving forward I know we are well versed on how to maximize our success.

SBTS: I heard your show was nominated for several awards. Can you tell me about that?

Roger Newcomb at We Love Soaps (www.welovesoaps.com) has been the biggest champion for indie soaps. Gotham won an Indie Soap Award in our first year. In 2010 we were nominated for an Emmy in a new category designed for content for the web. It was a great pat on the back for the work we had put into the show.

SBTS: What was production like for your webseries? Who did you work with?

The beauty of having worked in daytime television for so long, I had built in relationships with friends in front of the camera and behind the scenes. Our crew was mostly made up of people I worked with on ATWT. The cast was graciously filled with actors I had worked with or were recommended by friends of mine in the business. All professionals working for the greater good to keep soaps alive.

SBTS: Are you excited about bringing Gotham to television?

Very. It has been an incredible roller coaster ride and every day there is another challenge. After working on the web where it has been called the "wild west", now going to broadcast we have a lot more rules and regulations which I embrace. We're playing in the big leagues now and I couldn't be happier.

See our "Gotham" page for video and other updates.
Email ThisBlogThis!Share to TwitterShare to FacebookShare to Pinterest