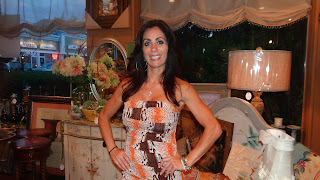 Tips from the Gym...

In the RHONJ episode airing June 16th Teresa's friend Linda, who we had never heard from on the show, was at the gym that Teresa and Linda always worked out at and in popped Jaqueline, Melissa and Kathy who apparently had never been to that gym.

Linda was dumbfounded. She immediately let Teresa know. And then the drama started.

I met Linda at one of Teresa's book signings. Ladies in the crowd were recognizing her and so I went over to talk to her about it.

"They NEVER come to our gym," She said. "I knew they were filming that day but I wasn't expecting that, and it ended up being a big deal."

Linda from the Gym, aka Linda Berger is very different from the persona portrayed on the show and she said she was not exactly thrilled with the editing. She can often be found at the gym - which certainly explains the lack of anything jellylike on her physique - because not only does she work out, but she is an AFAA trainer. Brains behind the beauty, I also learned she was a Certified Public Accountant, having graduated from Rutgers University. A fellow alum of mine, she was very well spoken.

"Okay then, Linda,", I said, seeing how I had a personal source now of fitness tips, "Seriously, tell us what the secret is."

The ladies I was standing there with were all in their forties, some over fifty. Ironically we were positioned near a huge spread of cupcakes from various local bakeries, including Baked in a Cup, cookies, wraps, salads and other foods. I was really hungry but all I did was take a glass of Diet Coke.

"Tell us what we should be doing. If someone has never been to a gym before, how would you suggest they start?" I asked.

Linda's eyes became expressive and you can tell she was genuinely eager to help. She said, "If you join a gym, I would first say to find an instructor. Have them show you around and show you how to use the equipment. Then take 5-10 one-on-one courses with an instructor. People have a fear of not working the machines right, and once your get familiar with the equipment, you will find something you like." She added, " I would also suggest taking a small group class. There are 60-70 year-olds in there so you shouldn't feel embarrassed."

Then I asked about women - and I hate to use this term - but middle-aged women. "What can we do?" I asked. "I walk all the time."

"You've got to switch it up, shake it up," she said. "Your body gets used to doing what it does all the time. People that clean houses and are active all day don't always lose weight because their bodies are used to walking up and down stairs and all that other stuff.  You've got to shock your body."

She continued, "As you get older you already have a tendency to gain so if you are not working out you are already at a disadvantage. You've got to keep moving.  I am a firm believer in that."

Linda suggests a cardio-sculpt class with weights as a good start. I also asked her about the tricep area, an area of difficulty for most women. "There are a lot of exercises for the triceps". At that point in time she demonstrated some. Tricep dips are great, but your elbow has to be back. She also suggested tricep extensions, adding the tip that you always have to come above your hip."

My last question was, as probably most viewers noticed, she looked great at the gym, "Do you always wear makeup to the gym?"

Will we see more of Linda on the show? Stay tuned....