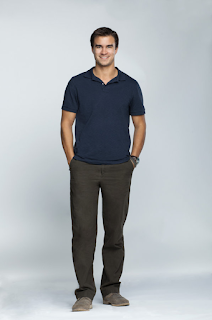 Editor's Note: Our #Powerjournalist Markos Papadatos was in West Palm Beach, Florida at the RomaDrama Live! Watch for new interviews every week in our "Summer Feel Good" Interview Series.

He is known for his acting work in the horror movie "John Dies at the End" (opposite Paul Giamatti) as well as "Jane by Design" on ABC Family, "90210" on the CW, and the MTV musical film "The American Mall," where he played the male lead Joey.

Aside from being an actor, Mayes is a gifted singer-songwriter in the country music world. He revealed that he has new music in the works.

"I have a new single out that I wrote with the great Dallas Davidson called 'Ain't Nothin' To See Here and I have a new song coming out on July 1st via Empire Nashville called 'Midwest USA'," he said.

He shared that his songwriting is inspired by "whatever he is feeling." "That's what I try to put in my music," he said.

On being an actor and musician in the digital age, he said,  "It is nice that we have the reach but the pay has to come up. I know the fair pay for songwriters is in the works and I hope that we can step it up."

"It's not all bad and I am glad that I get a lot of love from all the digital service providers and I am able to share my music with the world. That means a lot," he added.

Regarding the title of the current chapter of his life, Mayes said, "New Normal Baby."

He listed "The Shawshank Redemption" as his favorite movie. Lately, he has been binging such shows as "The Old Man," "Euphoria," "Barry," and "We Crashed."

In an effort to relax and unwind, he noted that he enjoys "writing songs and wine."

Mayes revealed that his favorite cheat meal is "pizza" and he lives by such mottos as "LFG!" and "hit 'em up."

For Mayes, success is "striving for more, not being satisfied but being grateful and fulfilled."

"I love you so much. Thank you for your endless support and come see me at a show," he concluded for the fans.