Review of Uncut Gems on Netflix: Adam Sandler's Standout Performance Leads this Edge of Your Seat, Nail-biting Thriller.. and it's Better the Second Time Around 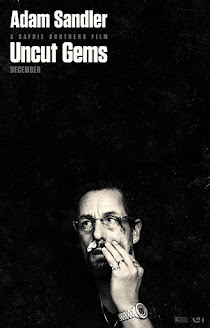 With the Uncut Gems’ arrival to Netflix, movie-watchers everywhere will have a second (and third and fourth) chance to watch the Safdie brother’s explosive collaboration with Adam Sandler. One of Sandler’s best acting performances in a decade, Uncut Gems was one of the best films 2019 had to offer, as well as indie-darling A24 Studio’s most successful film in the box office, grossing over $50 million domestically. From the first month of the film’s December 2019 release into early 2020, it felt like Uncut Gems was the film everyone was talking about.

With Sandler’s killer performance, the world-class editing, Kevin Garnett’s surprisingly polished acting chops, the ending that left theatres shocked, and everything in between, the film is an undisputed accomplishment for the Safdies, Sandler, and everyone else involved.

Some people hate rewatching films— and I see their argument. They claim that knowing the ending ruins the story and removes all of the suspense. I tend to think the journey is better than the destination in most cases, and this is especially evident with this film. Knowing about the eventual demise of our flawed hero, the film plays out like a Shakesperian tragedy more so than a crime thriller— but the suspense remains all the same. In my personal viewing experience in the first go-around, I already half-expected the quick-thinking Howard Ratner to not make it to the end of the movie. Watching him dig himself into a deeper and darker hole wasn’t only half the fun, it was almost all of the fun.

On my first viewing of the film, I didn’t have much sympathy for Ratner. I got a sadistic, voyeuristic pleasure in watching the schemer’s plans go awry and his situation grow increasingly more ridiculous and dire. I might just be sick in the head, but that may have been the point— Sandler allegedly turned down the role when it was offered to him nearly a decade ago, citing it was too wicked of a character for him to feel comfortable portraying. Upon a second viewing, however, I found myself feeling far more empathy for him. Not that his actions seemed morally correct the second time around, but understanding where this behavior will ultimately lead him makes his character far more sympathetic. 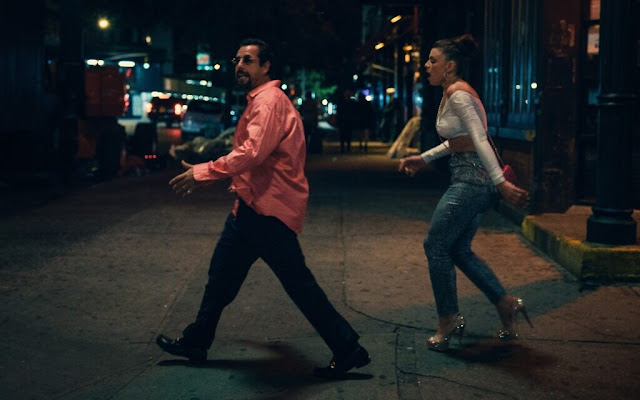 A quick word on the acting in this film before getting into the real meat and potatoes of the rewatch— this is among Sandler’s top performances in his entire career. I couldn’t imagine anyone else in this role. While it’s impossible to tonally compare this film to something like Happy Gilmore or Billy Madison, he’s appeared to evolve from the dramatic roles he’s taken in films such as Meyerowitz Stories and Punch-Drunk Love, truly taking his game up a notch in terms of passionate character-driven storytelling. Everyone else is equally wonderful in this movie, notably the terribly underrated Lakeith Stanfield as Demany and Kevin Garnett playing himself. Julia Fox’s role as Ratner’s mistress was also fantastically played, especially for a debut role. The entire cast is giving it their all, even the one-line roles of jewelers, bookies, and thugs feeling realistic, gritty, and darkly humorous.

If you haven’t seen the film, ask anyone what one word describes it best. I guarantee they’ll say: stressful, quick, thrilling, or some other synonym. This overpoweringly general consensus only proves my point. The main draw of this film isn’t the mystery of how it will end, or the underdog story of watching a small-time hustler make it big. The best part of this movie is the edge-of-your-seat, nail-biting suspense that the Sadfie brothers have nearly perfected in this story. If you haven’t seen the Sadfies’ previous film, Good Time, starring the talented Robert Pattinson, I highly suggest it if you enjoyed the fast-paced scumbag-protagonist genre that the brothers have made a career out of. The point is, even if you know how Uncut Gems ends, it’s still an incredibly fun movie all the way through— and the suspense is just as thrilling, if not more emotionally resonant.

As I said before, the film takes on a Shakesperian poetic justice reminiscent of Macbeth, or any other character whose own actions lead to their eventual doom. Watching Julia leave the casino with cash in hand as Ratner bleeds out on the floor of the jewelry store felt like even more of a gut-punch the second time around because I knew it was coming, and physically dreading it. While it loses the “surprise!” factor of the first watch, it gains so much more in creating an emotionally satisfying conclusion. I believe it was Hitchcock who said it was far more satisfying for an audience to dread a ticking time bomb than to be surprised by an unexpected explosion. 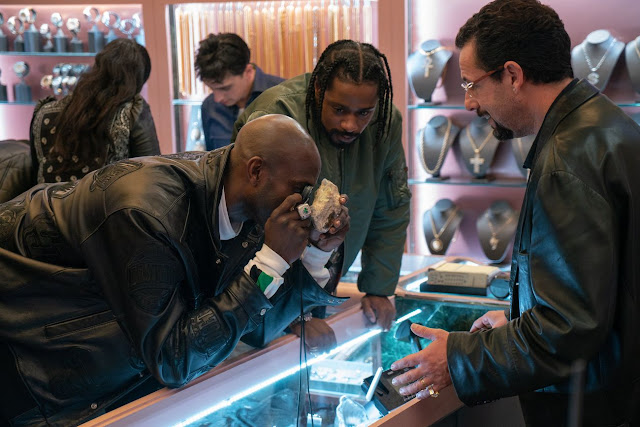 It would be a crime not to mention the directing, editing, and scripting as well. The fast cuts, crisp sound design, isolation framing techniques, and more, all contribute to the film’s perfectly contained chaos. Another critique of rewatching films is remembering everything that happened to the point that nothing is surprising. So much happens in this film, I guarantee you’ll notice tons of new things on the second watch that you missed the first time. This is due in large part to the masterclass touches from behind the scenes that bring certain story threads and details to a height, then immediately submerge them in the chaos yet again. Watching the whole thing unfold for a second time is a treat, and allows you to take a more objective look at how the story was able to surprise you the first time, yet keep you hooked all the way through.

No one needs to tell you that this is a great movie— that’s a given. But I’d recommend giving it a second watch when you have a free three hours (two hours to watch, one hour to recover). Unlike everyone who does business with Howard Ratner, you won't regret it.

Harry Sherer is a college senior and the newest writer for suzeeBEHINDTHESCENES.

Subscribe to our site for more of his articles