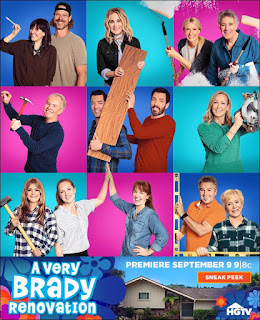 Well, for some reason I thought A Very Brady Renovation on HGTV would be a bit uneventful, I mean, we all know what the Brady House looks like, they're just going to replicate it. So, so much for the excitement of the standard yet always exciting HGTV reveal.
Man, was a I wrong. Rather than boring, it's like HGTV combined two of my favorite things in the whole world and made a show of it!
From the promos, it looked like it would be heavy on the HGTV people and not focus on the Brady clan. But, there's plenty of interaction with these 70's children and we get to see them work on the house - well maybe mostly for the camera - and talk in real life, a bunch of unscripted Bradys revealing a glimpse of their real personalities. Though Florence Henderson, Robert Reed and Ann B Davis has passed on,  Maureen McCormick, Eve Plumb, Cindy Olsen, Barry Williams,  Christopher Knight,  Mike Lookinland are all alive and well with hammers in hand .
The premise for each show is as follows:  One or two Bradys work with HGTV experts to redo a room. In the first episode,  the still charming Peter, worked on the exterior with the Property Brothers.  There was a window to be moved, a walkway to be changed, a new door, a new paint color and oh... they had to remove a wall in front of the property that had been needed to be put there to keep out the looky- lookers. Marcia and Cindy worked on the living room/dining room area with the brothers.
Even though I consider myself a Brady Superfan,  having watched it when it actually ran on Friday nights on ABC, I found myself acquiring lots of new Brady trivia. Sure, I can picture the living room in my head in a split second. But, did I know there were Mondrianesque panels on the wall behind the stairs? Did I remember there was a stone wall in the entry area? Did I know there was tiny clump of plastic grapes on the cocktail table (same as my mom had, though hers were in a bowl)? No I have to admit I did not. I did know about the horse and the  vase. In typical HGTV fashion this show focuses on the details of the house, so lots to learn about the sets that were actually in Studio 5 and not in this house on Dilling Street at all.

Like or Follow us on Facebook for more Interviews and Entertainment News. Your Support Keeps Us Going. We will never charge for our e-magazine.
https://www.facebook.com/BehindtheScenezz/
To add to the interest of the show, they also intersperse some nifty Brady fun facts during the episode. The Brady kids talk about certain scenes they remember, they show iconic clips from the show (well aren't they all?) and there was also a trivia question. In the first episode, the question was, "What was the name of the detergent the Bradys made a commercial for? I guessed "Fluff". I knew it had an "F" sound in it  but I was wrong. It was "Safe" Detergent. I guess I confused it with Fluffy, the name of their cat. So, so much to learn and to remember before I can actually call myself a true Brady aficionado.
So, even though I know what the room will look like after the reno and after they scour the planet for exact replicas, somehow, somehow, I am still GLUED to the set to see what it will look like and what responses the Bradys will have when they walk in the room. What is the matter with me? 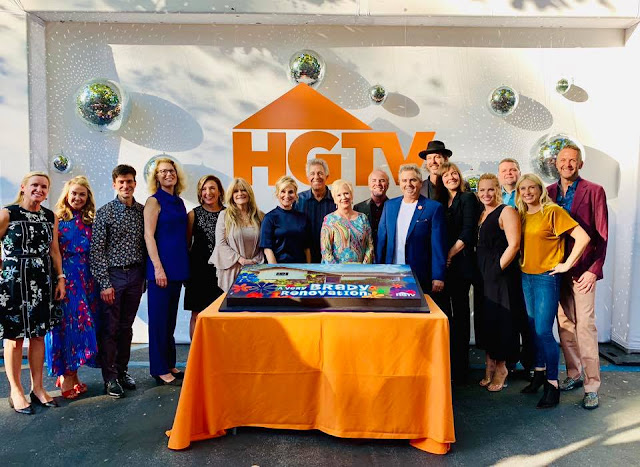 HGTV you have outdone yourself. Just when I was thinking you were doing too many property renos and not enough design you surprise us with a design/reno show bursting with personality and nostalgia. The 3.6 million you paid for the house, the conference house area next door and whatever else it cost is sure to pay off. I am happy to hear all the Bradys came on board.

Want more Brady? Listen to Kara Mayer Robinson's Interview
with the one and only Christopher Knight:
https://podcasts.apple.com/us/podcast/christopher-knight/id1231521180?i=1000438868054
I scoff at the reviews that say that you can't go home again. For those of us who watched the Brady Bunch in its heyday, who come from the same generation, this show is putting me in touch with my childhood. I recall happy moments watching it with my sister, sometimes with a bowl of ice cream that was our special treat for Friday night viewing. It is a joy to see the Brady kids still vibrant, laughing, recalling a part of their lives that that touched all of the viewer's lives so deeply. Just as the Brady Bunch was a reality in their lives it was also one in ours. And now it is the reality of now, of aging, of revisiting, of remembering.
There was an interesting comment in the show, something about how the whole thing is an combination of fact and fiction. Cindy replied "You're in the Brady Zone" (For those younger, a reference to The Twilight Zone).
I am happy to be in this zone.