Is Ellen DeGeneras "Relatable" In Her New Standup Special On Netflix? The Answer is YES, Relatable and LOL: Keep it Coming Ellen 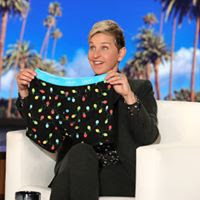 As a big fan of Ellen DeGeneras' daytime talk show, I was a bit disheartened to hear that she may be stepping down from it...maybe that is.

What she is doing now is going back to her roots, doing standup. Netflix nabbed her, and she’s got a special that just started streaming on this platform that now showcases comedians, and well, just about everything else. 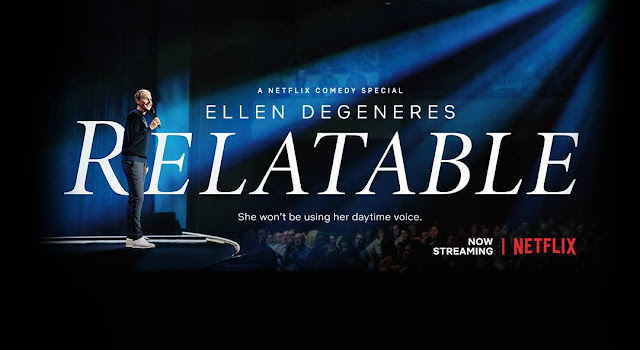 Did I like it? If you like her show you will love this special. Even if you don’t know her show, I think you’ll like it.

Right off the bat, she explains the title “Relatable.” So perhaps not everyone can relate to the fact that she has a butler and a solarium and a huge circular driveway with a fountain in the middle (she really doesn’t.. I think) but that’s what people THINK she does. Well I may google her home to see if she really doesn’t have that fountain, but the point is, she does have an awful lot more than most people.

However, she’s still a human being going through life just like anyone else – okay again maybe not like EVERYONE else - and that means she is going to talk about things that are “relatable”.

And she does. As I said, if you are a fan of her talk show you will love this special, because it’s like an extended version of the first few minutes of her show before the guests come on - complete with cute pics of cats and dogs and even video of whac-a-mole action lemurs.

I don’t want to give all the jokes away, so a little bit of a spoiler alert here, but she’s got a hysterical bit about slow drivers (why DO we need to see what they look like?) and a belly-laugh bit about people dancing to their favorite songs at a function. She does the latter skit as someone at a young age, and then a laugh-till-you-cry version of an old guy making his way to the dance floor. You gotta see it. 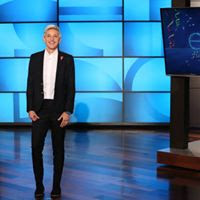 We’ll also be treated to some dance moves. We also learn that she almost regrets dancing on her show because wherever she goes people ask her to dance with them. (Note to Ellen - I can think of worse things. I do like Twitch, and Ellen the damage is already done, so please dance once in a while. It’s good for all the young people watching your show to see that women over 60 can boogie just as well- albeit a little slower-as girls half that age.)

So overall, her comedy is clean, contemporary and funny. It is not offensive. Ellen’s roots are in the same era as Seinfeld, so the jokes are not about differences in people they were born with but more slice-of-life humor. It is self-depracatory and yet enlightening.

She talks about being a lesbian - it's a non-issue to fans but it is part of who she is. It is hard to be a lesbian (or in anyway different from a supposed norm these days) no matter how much money you have, you just gotta be you.

And that’s what Ellen is doing in this special, she is just being her.