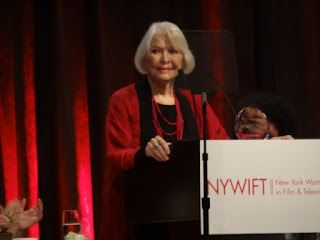 The energy in the room from the thousand or more -mostly females - was evident, electric and exciting as the New York Women in Film and Television held their annual MUSE Awards at the Hilton Midtown in New York City in December 2018.

This year's NYWIFT MUSE honorees were:

The sold-out event started with a cocktail reception. Then attendees sat in the main ballroom and were served chicken breast, a mixed, grain salad, a custard parfait and cookies. After the event there was another mixer for the attendees and members of NYWIFT to mingle.

Nancy Giles did another fantastic job hosting the event as she hosted last year, making us laugh and yet keeping the emphasis on the award winners.

Prior to each award winner, a video was shown, and then they had a few minutes to talk, but never talked too long.

The overall message of the event was that of, I would say, progress. Given the movements of the last few years for women in entertainment (and trickling down elsewhere) it was noted that progress has been made but there is still much more to do. Given the fact that the event was packed with women in entertainment, that in itself was a tribute to the amount of women now working in the industry.

This was something that Sarah Jessica Parker touched upon in her speech. She talked about her first job at age 11, working alongside Claire Bloom, and about the indelible impression all the women she has worked alongside has made an impact on her. She made sure to acknowledge all the incredible women working behind the scenes, noting the "accountants, production people, publicists, gaffers, make up artists, sound fixers, teamsters, etc." that silently get the job done. She also mentioned how fortuntate she as to be able to act as a young women and "still pay her Con-ed bill".

Before Sarah Jessica Parker accepted her award, they showed not one but two videos about her. One was message from friends, another lots of clips of Sarah from her teen years until now.  Of course, her break-up scene on the day of her wedding outside a limo on the streets of NYC with Mr. Big was one of the clips. I got mad at him all over again.

Maysoon Zayid did a wonderful job entertaining the crowd with her humor. Zayid is in development with ABC for a series, and I hope it happens because her message needs to be told. I met Maysoon many years ago on a production and was so happy to see the success that she has had. This beautiful woman is stong, determined and funny. 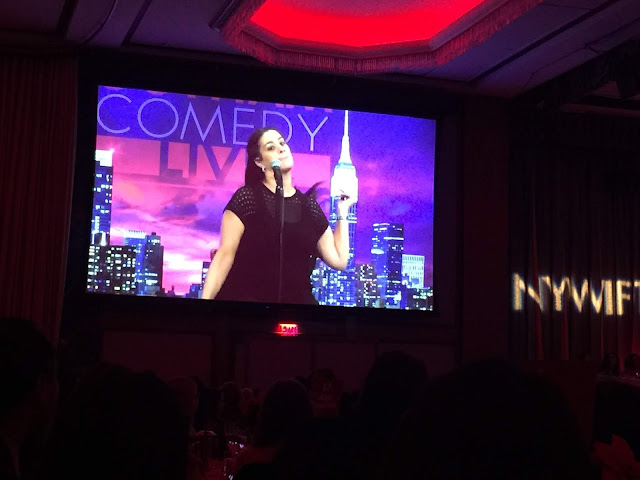 And did I mention she has CP? She made jokes about how she got into Arizona State University by "checking off every box they had" including "female, handicapped, Middle Eastern... oh yeah, and being from Jersey!" She also talked about how "people dream of being handicapped".... which caused silence in the crowd.. until she ended the sentence with "when you're passing by the empty handicapped parking spot at the mall." 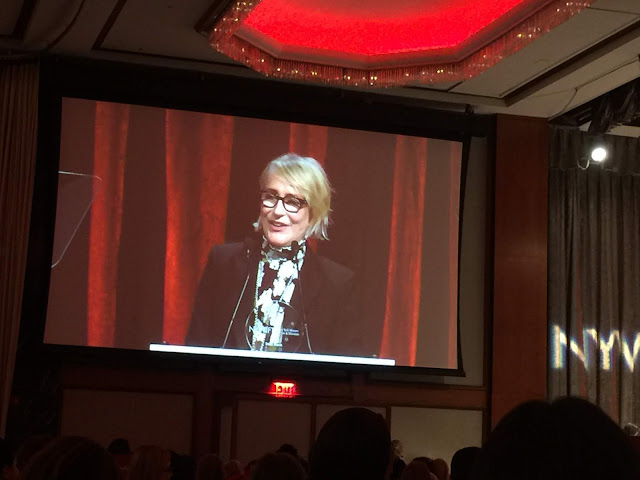 Director Tricia Brock said that "no one can underesimate the power of having great women behind them."  She also said how she was fortunate to be able to connect with all kinds of people in her role and support the "work of storytellers and truthtellers." 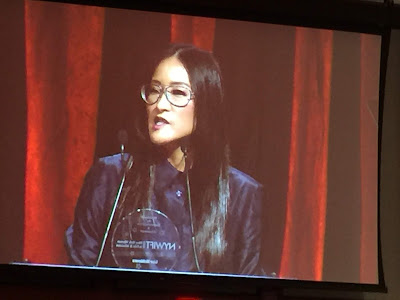 Lisa Nishimura gave some personal anectodes about her family and stressed the importance of a "bucket list", not just for the future but for now. 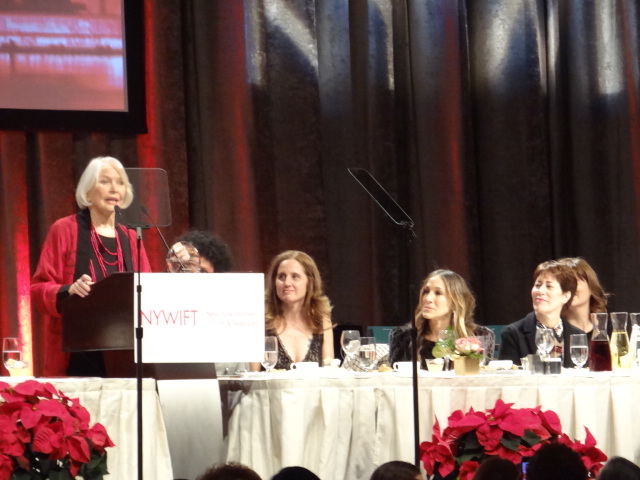 Ellen Burstyn did not have to say much about her career, as it was self-explanatory for even those who were not familiar with her full body of work from the video they showed. It showed her in dramatic scenes for decades starting as a young woman in black and white movies. She talked about how grateful she was for her career and said how she had been receiving a lot of awards as of late, perhaps "just because I am still here." 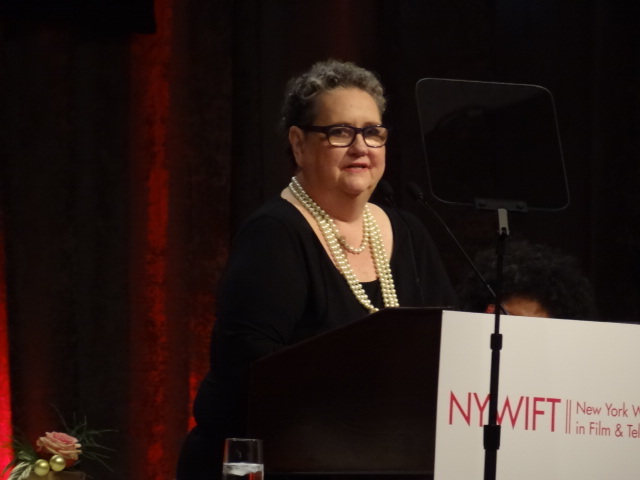 Terry Lawler, who is stepping down from her job as Executive Director, thanked the staff and everyone there for all they do. She also talked about her admiration for and the encouragement she got from the production alliance, who fights to keep the tax incentives and started a lot of mentoring programs and grants.

According to the program, "NYWIFT is the pre-eminate entertainment industry association for women in New York. They energize women by illuminating their achievments, presenting training and professional development programs, awarding scholarships and grants and providing access to a supportive community of peers." The membership exceeds 2,500. They have a weekly newsletter which keeps any interested female (or male) up to date with what the members are doing, many of which are the names to note in the future. They also host a variety of events including screenings of many new films for members. For information visit:
https://www.nywift.org/
Email ThisBlogThis!Share to TwitterShare to FacebookShare to Pinterest