Movie Review of Puzzle: Kelly Macdonald Fits Perfectly into this Female-Driven Drama about a Women Rearranging the Pieces of Her Life 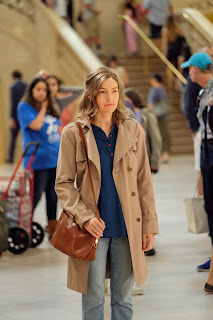 Review of The Puzzle by Suzanne Ordas Curry

This movie, Puzzle, needs to be reviewed by a female because I think, a female will understand this movie on a deeper level.

The movie starts with a birthday party for the main character, Agnes, played superbly and believably by Kelly Macdonald. We see a birthday cake. Right off the bat, any woman can tell that this woman baked the cake for herself. We see her cleaning up during the party. Already as women we understand this scenario, we get a glimpse of her life.

Then we learn a little more about her. She gets a new Iphone as a gift, not that unusual, she gets a puzzle. We know already these are key elements in the movie, indeed they set the stage for the transformation of this character.

Though set in present day New York, it is obvious that Agnes is not the modern 21st century woman. She is a homemaker, a stay-at-home mom as many women still choose to be, but still, not as with it as a 21st century mom. And we are invited into the dynamic of the marriage, her husband, (played by Daniel Sherman), though faithful and basically kind, expects certain  behavior and obedience from her.  It is a scheduled, predictable but comfortable life.

I had a bit of a hard time listening to the dialague between she and her husband perhaps because I was just wishing she could have interesting, human dialogue with him rather than mundane, family-based chatter. However, the storyline and dialogue with her two sons, in their 20’s was very present-day and spot on, and I know this because I have two sons in the same age range. They could have been any kids these days. The interaction they had with their mother was also quite realistic. Agnes raised two fine boys who loved their mother and their family, who were also coming of age and trying to break free from the planned monotomy. 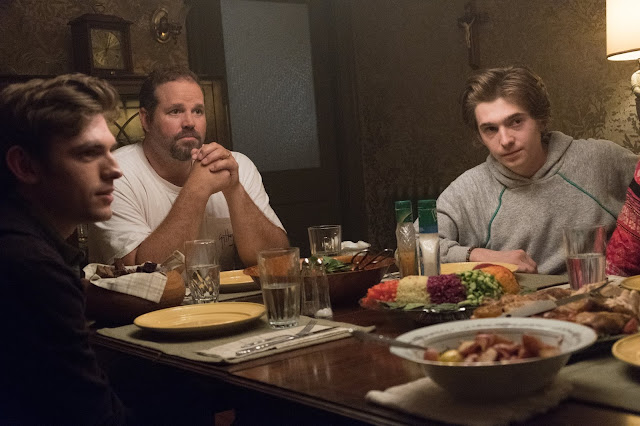 I thought the movie moved at a good pace, it kept my interest and though the progression of the movie was orderly, I really did not know what would happen next.

As the story unravels we see Agnes make some changes in her life. I would not right off the bat classify it as a mid-life crisis, or even changes due to hormones, because really it is more than than and that as well. Agnes is the story of a woman who looks at her life and decides there is more to it, that life is too short, and come hell or high water it’s time to take some risk and go out and do something. For Agnes this happened after her kids were grown, but for other women it could happen anytime. It's what Oprah wants all us females to do. Whether it is propogated by doing puzzles, or anything else, the puzzle backdrop was just that, a backdrop to the real story. 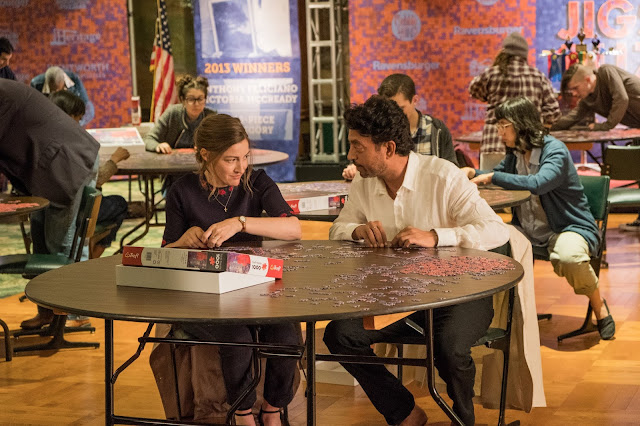 Agnes takes a lot of risks, her personality you might say changes but perhaps grows is a better word and does things one would not expect her to do. At some points the viewer is rooting for her and at other times thinks okay now you’ve gone too far.

Puzzle was originally a n Argentine film and this is the American adaptation. I found world of puzzles fascinating as I did not know there were puzzle championships, and the competition aspect of the movie had me rooting for her. However, the movie is really about a family relationship and a woman coming of age. 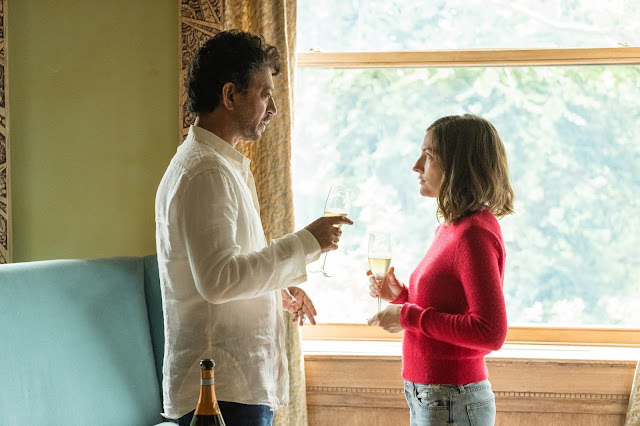 I know woman like her, they are among us. They may not have old furniture in their house, or not use a cell phone and may not go to Bible study every week. But these Stepfordesque women who are not living their lives to their fullest are all over. They might smile at us in the supermarket, but deep down they feel trapped in their lives. Their kids are out of their house, and they don’t know what to do next.

That was my message, my takeaway, as a female with two grown boys. Go live your life - (spoiler coming - maybe don’t have an affair )- but explore and do what makes you happy. This movie will make anyone think about their own lives, their marriages and their choices.

This was an enjoyable, solid drama, full of twists and turns, with an interesting glimpse into the world of competitive puzzling. The characters were rich with personality. Irrfan Khan was an exotic, appropriate choice as her puzzle partner and added to the diversity of the cast and her life.

I also appreciated the use of lighting in the scenes as a symbol of her awakening.This is a rich story, driven by a female and done through her perspective. It's a drama, a story of empowerment, driven by the tiniest of objects, a piece of cardboard. Inspiration can truly come from anywhere.

How we rate: https://www.suzeebehindthescenes.com/2017/03/rating-womens-films-woman-o-meter-seeks.html
Email ThisBlogThis!Share to TwitterShare to FacebookShare to Pinterest