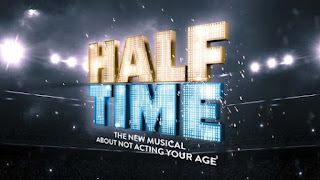 Review by Beth Abramson Brier
They got sizzle. They got style.  But most of all, they got swag!  I’m not talkin’ ‘bout Beyoncé and her bae Jay-Z.  I’m talking Seniors (yeah, like the AARP card carrying  kind) and the east coast premiere of Half Time now at Paper Mill Playhouse in Millburn, New Jersey through July 1, 2018.  While a show about geriatric dancers may seem an unlikely theme, “this is not your father’s Oldsmobile®”!


Half Time is the little known but rockin’ true story of ten senior citizens selected to form a dance troupe for the New Jersey Nets basketball team.  Based on the 2008 documentary Gotta Dance directed by Dori Berinstein, this production brings together an impressive award winning cast.  Many, long time veterans of stage and screen, they know a thing or two about experience, endurance and even hip hop! What starts out as a publicity stunt becomes a lesson in ageism and a dazzling tribute to the age-less soul.
Tara (Haven Burton) is tasked with teaching a track-suit-wearing ensemble of over-sixty wanna be dancers a hip hop routine they will perform at center court in just a few short weeks.  Georgia Engel is unassumingly hilarious as Dorothy- alter ego Dottie- and the only one of the troupe who truly “gets” hip hop. Best known to me as Ted Baxter’s wife on The Mary Tyler Moore Show, her mouse-like voice still roars with gumption.  Dottie goes to Hell (really!) and the debonair swing dancer Ron (André De Shields), takes notice. 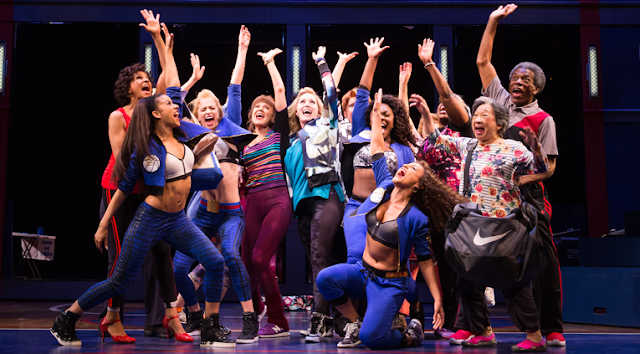 While Tara is coaching the team to “twerk it” and “work it”, the new dancers struggle with aches and pains of getting older, both physical and emotional.  Mae (Lori Tan Chinn) leads them out of Hell (really!) and takes them to a sock hop – to a time long before her husband’s reality of Alzheimer’s.  Fighting to hold onto their youth, Fran Lenora Nemetz) gives Muriel (Kay Walbye) a Mary Kay makeover complete with too much rouge and Camilla (Nancy Ticotin) finds a twenty-five year old lover.  And while Joanne (Donna McKechnie) reminds us there is no age limit for mean girls, I want to ride along with Bea (Lillias White), who risks her fragile one-sided relationship with her granddaughter Kendra (newcomer Nkeki Obi-Melekwe) to share her well-earned wisdom about man-boys.
Jerry Mitchell directs and choreographs this high energy production with the heart-breakingly funny lyrics by Matthew Sklar and music by Nell Banjamin.  David Rockwell designed a set that is simple and unpretentious to draw the audience into the intimate rehearsal studio.   The wardrobe, featuring polyester elastic waist pants, pastel sweatshirts and Velcro fasten shoes made me want to rush backstage and ask costume designer Gregg Barnes, “OMG!  DO I LOOK LIKE THIS???”
Spoiler alert- Yes!  They dance!  And so did the audience, which ranged in ages from young to “gold”.  The standing ovation was more of a party in this glammed-out sold-out house. Half Time is the perfect selection to wrap up this season at Paper Mill which celebrates its 80th anniversary.  And I hope it’s just getting started. After all, as the opening number reminds us, “Age is Just a Number”.  And they got your number!

For Tickets: https://papermill.org/show/half-time/
Email ThisBlogThis!Share to TwitterShare to FacebookShare to Pinterest