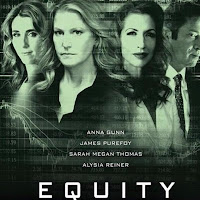 Fan of the movie Equity?

You'll be happy to know that it has landed at ABC as a script commitment with Sony TV's Tri-Star as the studio. The movie, which premiered at Sundance in 2016, was bought and released by Sony Pictures Classics. Equity was release in theaters this past summer and will be out on DVD December 13th, 2016.


The story of the movie is based around Naomi Bishop, played by Anna Gunn (Breaking Bad, Sully) who is  a smart, seasoned, competitive female investment banker whose current project is to take a privacy company public. But, no matter how good the plans, she finds that things can go awry- and often because of the people you suspect least. That's business. That's Wall Street, And that's what makes a suspenseful movie and TV show.


Without giving too much of the movie away (spoiler coming), few people know this movie actually had two endings.and only one made the final cut to the theatrical release. The movie originally ended with Naomi going back to the golf course to meet her mentor (played by the handsome James Naughton) to talk about a new start-up. But in the final version, we don't know what the future holds for Naomi. She "leaves" her company, she eats candy, she boxes, we just don't know!

This of course, leaves the storyline wide open for the TV pilot. There is no news yet on who will star in the pilot, which is stock full of female roles.

Regina Corrado (The Strain) has adapted this movie for the small screen. She will act as EP along with  Amy Pascal of Pascal's Pictures and EP's of the movie Alysia Reiner (OITNB) and Sarah Megan Thomas (Backwards Movie).

For more on the making of Equity the Movie click here:
http://www.suzeebehindthescenes.com/2016/04/equity-film-screens-at-tribeca-cast.html
Email ThisBlogThis!Share to TwitterShare to FacebookShare to Pinterest