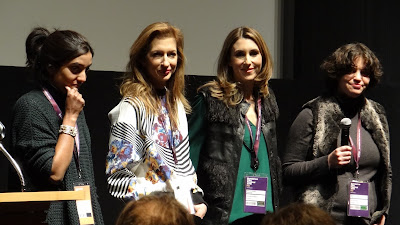 Equity, premiered at Sundance 2016 at the Library in Park City, Utah.

On a comfortably cold evening in January the theater was sold out to see this female-driven financial thriller that was sold to Sony Classics Pictures before it's Sundance audience premiere.

The movie stars Breaking Bad's Anna Gunn as a female investment banker struggling in her career who takes a company public. Her boyfriend is played by James Purefoy, The film's producers,  Alysia Reiner and Sarah Megan Thomas, had starring roles aside Ms. Gunn. 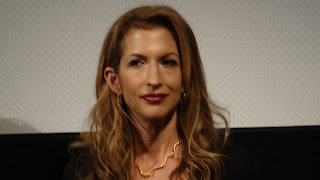 All eyes were glued on the screen as the plot unfolded. Equity is a complex movie about the behind-the scenes of an IPO. There are multiple characters, distinct personalities and subplots all contributing to the eventual climax of the movie, the day the stock went public.  It's the kind of movie that needs to be seen twice to get a full understanding of the relationships of the characters and how these affect the ending.

The movies was produced by with the help of real female investment bankers, with monetary support as well as story support. in fact, some of the producers, who are current investment bankers, have  cameos in the film. One co-producer spent hours with screenplay writer Amy Fox explaining the math behind the movie. Another co-producer spent time explaining the complex relationships females have in banking. 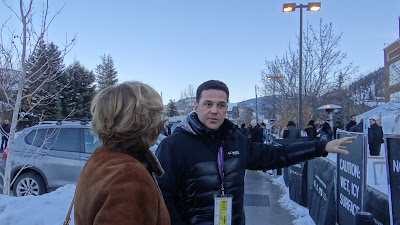 The Q and A started with writer Amy Fox talking about the the script. "As  a writer, I always want to be working on something that means something,  that has something to say in the world, but it's not a documentary. It's gotta be a page turner, something to keep you on the edge of your seats. Otherwise it's an essay, that's not what we wanted to do, we are making a movie." 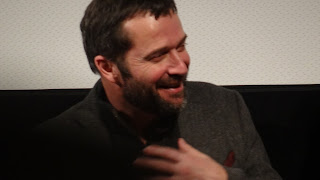 Alysia Reiner, who played Sam the compliance officer said, "I try to think that it's a stealth bomb-issuing. You like, have this really exciting thriller, and there's this stealth bomb in it, something that's changing the world for women."

Sarah added,  "Our real goal in making this film is that you enjoy the movie. We want you to see a thriller, and then when you leave, when you go have a drink, or dinner, or whatever you do, that you talk about it, that is was written by women, produced by women, directed by women, starring women, it's not there when you watch it, it's just there after." 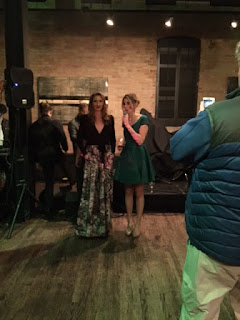 She also added how her husband works on Wall street, which was part of the inspiration for the film, and that she has met many people on Wall street, males and females.  She said she "wanted to show a side of the business, including the women, that's not shown. She pointed out how there's no " cocaine, or strip clubs in the movie - that was really important in the development of this film.'

After the premiere, a premiere part with cast and crew was held by Bloomberg at the Riverhorse in Park City. The after party was at the Montage.