Okay so the Sharknado Franchise is really bad. But's it's so bad it's really good. It is stupid but entertaining. The best way to watch these computer-enhanced, you've got-to-be-kidding me movies is when they show the Twitter comments. You just have to laugh, and isn't that what makes us tune in?

If we had not seen enough sharks devouring people along the Califorina Coast and NYC, now we find out that those man-eating, limb-stealing fish, mammals, whatever they are will be attacking our nation's capital.

We've seen cameos by some high-profile people in the NYC debacle. Hard to believe Al Roker and Matt Lauer would lend their names to such a movie, but they did and it worked. Will we see some of our government's best and brightest in the DC version? Will President Obama succumb to the jaws of a shark? Will sharks smash through the windows of Congress when they are just about to actually make a decision? Will poor Mr. Lincoln find his hands or feet of stone cut off? Will the Washington Monument somehow be used as a weapon to pierce through an army of invading carnivores? 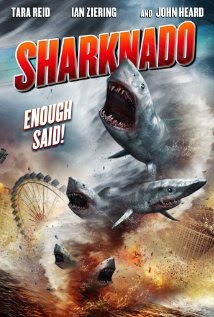 The possibilities are endless, only limited by the imagination of the producers and we know they are all quite creative.

Then after the fish invade DC, they head down to vacation in sunny Florida. I assume they will meet up down there with many relatives and wreak even more havoc on some unsuspecting seniors.

Some day, in a future Sharknado movie, I would like to see these amazing animals evolve into flying sharks with wings. It could happen, right?

Hey NJ - did you know that Tara Reid was from NJ? She grew up in Wyckoff, NJ. Her mom was famous before her, because she owned Donna Reid's Preschool in Mahwah, NJ, which was a mom-approved favorite.

This fin-filled movie is set to hit SyFy in Summer of 2015. But don't expect any sharks at the Jersey Shore this summer, Ian and Tara sent they sent them all south of our metropolitan shores in Sharknado 2.