Di's Dish: A Tribute to Glee

Goodbye Finn, Goodbye Cory
GLEE puts together a superb tribute in “The Quarterback.” 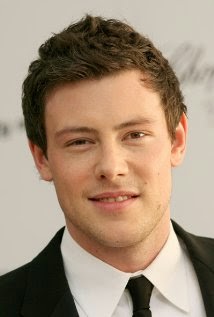 I have been a fan of Glee from day one and have seen every episode.  Finn Hudson was one of my favorite television characters of all time.  He was lovable, talented, earnest, and was always trying to do the right thing.  The creators of Glee tackled a difficult subject with the untimely death of Cory Monteith, and they delivered a tasteful and moving episode.  They also delivered an essay on grieving.

The show opens beautifully with “Seasons of Love.”  The setting is spare and appropriate.  The song is performed by cast members past and present, grouped into sort of a pecking order.  This is a good choice.  As a fan of the show, I did not think the newer characters should have a central role in the tribute.  Their relationship with Finn was fleeting.

Next we see Kurt preparing to travel to Ohio from New York.  Kurt is devastated of course, yet grieving with determination.
He is taking care of the memorial, comforting others, and at the same time trying to process the loss of his stepbrother.  I would have liked to see Kurt sing (solo) to express his grief in lieu of Mercedes.  “Stand by You” was delivered with her usual soulful and powerful style, however other characters had a stronger one-on-one bond with Finn than she.  “Stand by You” referenced a moment from a past episode that combined poignancy and humor – Finn singing to a sonogram.

The scene in Finn’s bedroom is difficult to watch.  Finn’s stepfather, Burt, is filled with guilt, regret and sadness.  He refers back to one of the most powerful scenes ever shown on Glee – when Burt laid into Finn over a “faggy lamp” comment.  He laments that he should have hugged Finn more.  Finn’s mother, Carol, and her crushing sorrow are beyond description.  Finn’s letterman jacket is saved by Kurt from the donation bin and becomes a coveted item.

Artie and Sam’s voices complement each other well for a duet of “Fire and Rain.”   They both had a strong bond with Finn, however I think that Artie’s relationship with Finn ran just a little more deeply (battering ram, anyone?).  For that reason, I wish Artie had been given some more dialogue.

Puck is grieving with pure anger and sadness, yet he is afraid to cry for fear of never stopping.  He is feeling lost without his buddy, and wonders how he will go on with life without him.  Coach Beiste provides comfort and guidance.

In a light moment, which was appropriately placed within the show, Tina complains through tears to Emma that she can’t keep wearing black because she stopped sporting the goth look a long time ago.  Tina is often self-centered and she did not have a direct close bond with Finn, so this was an excellent way to incorporate some levity.

Santana is grieving with anger and guilt.  She has come to realize that Finn was kind to her, even at times when she didn’t deserve the kindness.  She becomes protective of the memorial and furious when the letterman jacket is stolen.  She can’t get through her rendition of “If I Die Young” and leaves the room in a devastating moment, screaming when others try to comfort her.  She wants to grieve alone but can’t handle her deep emotions.  Santana eventually lashes out at Sue over her poor treatment of Finn.  All of her anger, past and present, explodes on Sue.  This forces a moment of truth for Sue, who feels deep regret for the way she tormented Finn.  More on that later.

In one of the most brilliant, fitting and touching song choices in the history of Glee, Puck sings “No Surrender” to an empty chair.  It felt as if Springsteen had written the lyrics specifically for that moment – words of blood brothers, drums and guitars and “we learned more from a three minute record than we ever learned in school” rang true for Puck and Finn’s strong yet tumultuous friendship.

Rachel shows up with grace and strength.  She sings “Make You Feel My Love.”  Nothing but pure, raw emotion.  You almost expect Finn to walk into the room.  Enough said.

Rachel talks to Mr. Schue about shattered dreams and when he asks her “how are you” she responds “I have no idea.”  She is lost, and cannot imagine anyone or anything better in her future than what she already had with Finn.  I think the show should have ended with Rachel in quiet contemplation.

The show ends with Mr. Shue, who was functioning as a pillar of strength for everyone, breaking down with sorrow in his apartment, clutching the stolen letterman jacket.

Of course, there were many lines of dialogue that stood out.  Here are a few that struck me:

Sue: We honor Finn Hudson by taking care of the people he loved.

Mr. Schue:  He was our quarterback.

Mercedes:  He was the first cool kid to be nice to any of us.

Sue:  Grief can bring out the irrational in all of us.

Kurt:  Seeing him come through the hallway wearing this – it was like Superman had arrived.

Puck:  What chance do I have of not being an idiot and hurting people without him around to remind me of who I really am.

Rachel:  He was my person.

Sue:  There is no lesson here.

This last comment, “there is no lesson here,” could be interpreted to mean that there is no lesson in Finn and Cory’s death.  I don’t believe that was the intent of the Glee writers.  The statement was made in the context of Sue having her moment of truth in front of Santana.  Sue says “I was horrible to that kid, and I’m utterly destroyed that he died thinking I didn’t like him.”  Santana suggests maybe this could be a lesson, and Sue, true to character, says “Cut the crap, will ya?  I don’t care about that, I don’t care about people, I care about him.  He was such a good guy.  I’ll never get to tell him.  There’s no lesson here.  There’s no happy ending.  There’s nothing.  He’s just gone.”

When someone dies and we hadn’t treated them well when they were alive, there is no making up for it.  We can’t go back and undo our actions, and any chance to give an explanation to the other person has been ripped away.  Sue knows that she will live with deep regret.

I chose the lines of dialogue mentioned above because they represent myriad thoughts, sentiments and emotions that are left behind when someone dies.  We focus on the person’s life, what they meant to us, what they brought to the world, and what we think our life will be like without them.