Review of Amazon Series The Boys - Not your Regular Superheroes Story but an Ongoing Tale That's Wonderful, Twisted and Utterly Unpredictable

If you haven’t heard of The Boys yet, consider this a warning. If you like Marvel or DC, this is a death sentence. If you like political commentary, this is a wake-up call. If you like good television, this is a must. And that’s not to mention the tornado of plot twists, explicit language, and laser-eyed babies. The Boys might be the best new show on television, and the season two finale promises that this is only the beginning of what is hopefully a long and eventful journey to “streaming original’s” Mount Rushmore. Yeah, it’s that good.

The Boys is an Amazon Original that premiered in the summer of 2019, and just wrapped up a stellar second season. Both seasons are critically acclaimed and loved by audiences, earning an 84% and 97% on Rotten Tomatoes, respectively. It’s also the only non-Netflix program to break into Nielsen’s top 10 weekly streaming shows. The series is executive produced by the all-star team of Eric Kripke (Supernatural, Revolution), Evan Goldberg (Superbad, Pineapple Express), and Seth Rogen.

The premise of the show is simple: what if superheroes really existed? No, not like the “end-the-world” or “save-the-cube” monotony of most superhero media -The Boys exists in an eerily recognizable modern-day America, and doesn’t shy away from serious themes. Throughout their two seasons, The Boys tackles real-world issues like corporate greed, celebrity worship, Neo-Nazis, and the origin of evil. Even with this wide scope, the series never loses focus, instead choosing to tell the story through a web of well-realized and complex characters.

The series’ main focus is on the conflict between The Seven, a group of superheroes (“supes”) that parody The Justice League and are backed by the megacorporation Vought International, against The Boys, a ragtag team of vigilantes, each with their own vendetta against The Seven. In this world, the superheroes are more often the bad guys than not. 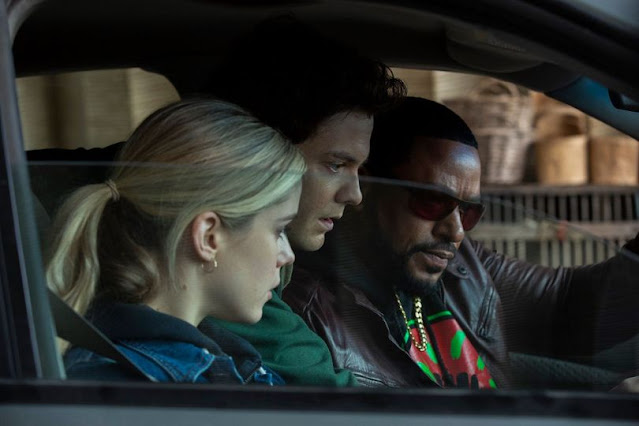 But the show takes the idea much further than the corny “black-and-white,” “good versus evil” narratives that most superhero media pedals. Instead, each member of The Boys and The Seven deal with their own conflicting fears and motivations that oftentimes makes the show feel more like a drama than anything else. The story is based on the Garth Ennis comic of the same name, and while the show departs from much of the comic’s story, it has been praised as a fantastic adaptation of its spirit.

That being said, you won’t like this show if you don’t enjoy (or at least can tolerate) copious profanity, CGI violence, and a fair amount of disturbing scenes and images. If Marvel and DC whitewash our world, The Boys is unapologetically bleak and rowdy, an odd combination that they somehow pull off quite well, especially by Karl Urban, who plays Billy Butcher, The Boys’ charismatic and often terrifying leader. But more on him and his peers later. While occasionally gratuitous, the violence is often creative, purposeful, and telling— the way Butcher brandishes his signature crowbar is far different than how newcomer and audience surrogate Hughie Campbell (the fantastic Dennis Quaid) fumbles with a pistol.

Don’t get me wrong, I love Marvel and DC, but how many three-act-structure underdog stories can you watch until your eyes start to bleed? If The Boys is anything, it’s unpredictable. I refuse to give you any plot details, because I fully believe every twist and turn this show takes is worth experiencing with a clear mind. Don’t even watch the trailer— it’ll give away the first episode twist, which remains one of my favorites. What I will say is this— if you think you know where the show is going, you don’t. And the twists don’t feel cheesy or over-the-top. Every victory and failure feels dreadfully inevitable, due in large part to the stellar writing and character work. 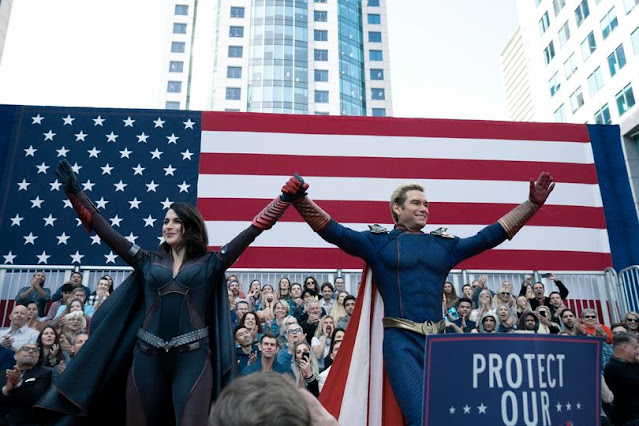 Fine— I’ll talk about Homelander. The leader of The Seven and the world’s most powerful man, The Boys’ iteration of a dark superman is every bit as psychopathic, pitiful, violent, unstable, and arrogant as you’d like. He’s the epitome of a “love to hate” character, and Antony Starr’s nuanced and charismatic portrayal makes him the focal point of every scene he’s in. And while season one wades into the broken psyche of the man/god/child, season two takes him on an impressive arc that explores the very depths of his character, promising only more probing in the upcoming season. There are almost too many stand-out performances to make note of— it’s clear that every actor on set has a ton of fun playing their role, and that translates onto the screen as a funny, dramatic, action-packed series with seriously good acting.

Season two of The Boys built on the wonderful and twisted world and characters of the first season and brought them to new creative heights. That’s what I find so impressive about the show. It took everything that was great about the first season— the thrills, twists, worldbuilding, and stellar characters— and built upon them in natural yet surprising ways. I won’t lie, I initially wasn’t sold. The hectics of the new season are precipitated by the arrival of Aya Cash’s Stormfront, a new hero bent on taking on Homelander as the new leader of The Seven. I always hated the trope of “throw in a new character to mix things up,” but the Stormfront storyline is undoubtedly among the best of the season, with the creativity of the writing team and dedication of the actors surprising me in every damn episode.

The best part? The finale of season two sets up the show for a variety of new conflicts, and the promised arrival of Jensen Ackles as Soldier Boy will likely be a great addition to an already talented cast. I wouldn’t be surprised if season three is the best yet. Without giving away too much, we should also be in store for plenty more of Homelander’s psychopathic ways, as well as a new direction for both Butcher and Hughie. It kills me to not give away any more, but this show is truly worth watching without previous knowledge of its events.

If you like superheroes, stellar writing, inspired performances, or creative plotting, give The Boys a shot - before you miss out on the best TV of the year.

For more info on The Boys: