RHONJ Kathy Wakile's Pizza Love Restaurant Review - What's Not To Love About It? 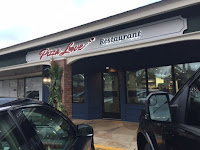 So, here in RHONJ territory in Northern NJ the news of Kathy Wakile's new pizza place opening hit all the local media rather quickly.

I had to go try it out, so I went over last Saturday to see if I would LOVE Pizza LOVE. Did I?

The pizza restaurant is located in a typical strip mall on the main road in Wyckoff, a nice suburban town, known for it's trees, nice neighborhoods and a really good Marshall's. 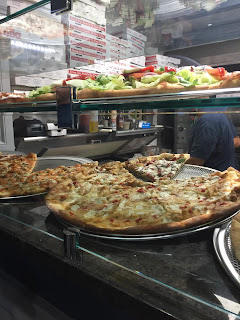 Aesthetically, it was an upscale pizza place as one might find in North Jersey or anywhere in the New York metro area. It was very clean-looking inside. Inside the walls were a shade of pale blue, there were two flat-screens hanging on opposite walls, and nothing else on the walls yet. There was seating for about 100. There were plenty of servers, all neatly dressed in matching shirts.  The tables and chairs were modern and thankfully sans the red-checkered table cloths all too prevalent around here. Most of the tables were filled when I was there and there was a steady stream of people coming in. Still, there were plenty of parking spaces left in the mall. 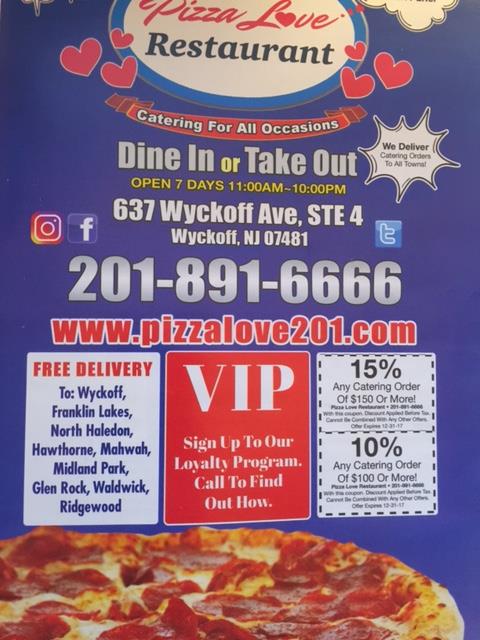 I took a menu and looked it over. It was a really, really full menu. If you are older bring your readers because they had to make the type quite small in order to fit everything.  I knew pretty much what I wanted anyway, I would get my usual because that's what I can judge on.

So you can see why the menu was so long, what I listed were just the subheads. 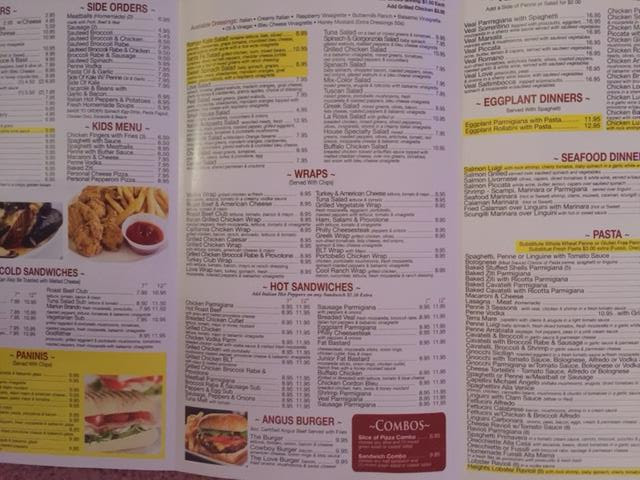 There were also some great coupons. Coupons are always a plus. There are so many pizza places around here that coupons do bring people in over another place without coupons. 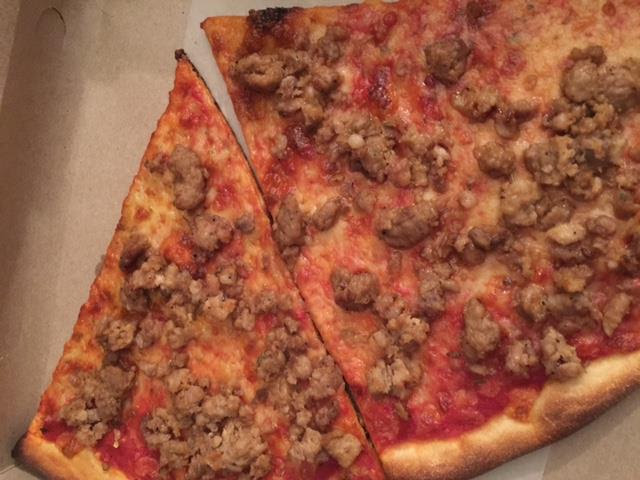 I ordered two slices of pizza, one with sausage, one without. I ordered a chicken parm sandwich, and a caesar salad with chicken, dressing on the side. The attendants were quite nice and helpful as I placed my TO GO order. Then, after I had placed it, my husband called and said he wanted sausage on both slices, so I changed my order after it had been placed. They said it was no problem, and when I offered to give them more for the sausage, they said "that's okay". That was nice of them considering I already had my dollar ready to give them. 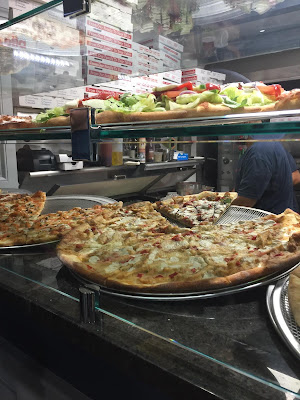 I was doing a take-out order, so I had to stand near the condiments or sit down while I waited. I did a little of both. While I was waiting I couldn't help but notice all of the pizzas on display - over 10 -  and thought that I would have to come back to try something different, especially the pizza with the lettuce, mozzarella and balsamic drizzle on it. That looked great- and healthy too!

So here's my take on the food:

The Pizza - My husband, who is a pizza connoissuer, loved his slices. The were full of sausage clumps, not slices or wedges, so the flavor leaked into the cheese. This slice was true thin crust, the crust was a bit dark, thin and the pizza was not oozing with cheese. My husband thought it was a great balance of sauce and cheese.

Want more RHONJ? Click on our RHONJ Page above.

Chicken Caesar Salad - I have ordered caesar salads all over the country and tend to be quite picky. This was a great salad. The chicken was real chicken, not processed. It was freshly grilled to the point where the seasonings used, combined with the grilling, gave it almost a steak-like flavor. There were large pieces of chicken, not diced or sliced thin, a generous amount. And the chicken was moist.  The greens were green, fragrant and fresh. And, and this is a rarity the parmesan cheese was fresh cheese. There was plenty of it throughout the lettuce. There were some larger shaved pieces but there was also grated cheese throughout. Then there were croutons, they were big, flavorful and crusty. I think they were homemade. 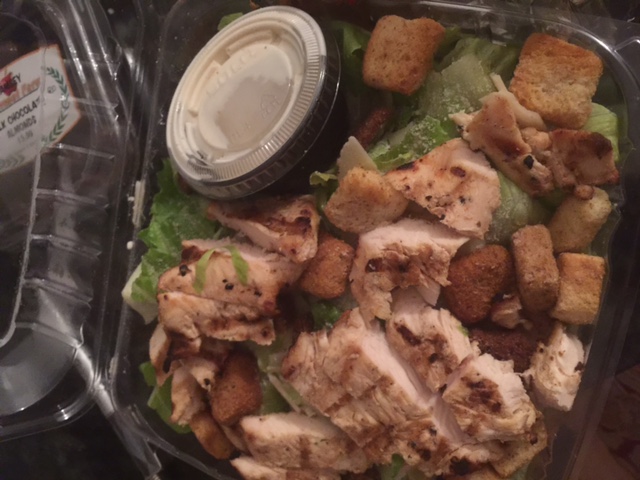 The dressing was creamy and white with a true caeser flavor, not a creamy Italian some places try to fend off as Caesar. I do not think it was homemade as I did not really smell or taste any anchovy, but it was better than the usually oily, tan-colored caesar dressing most pizza places use.

The Chicken Parm Sandwich - I ordered the larger size for $11.95, and it was a healthy size. The first thing that struck me was the toasted roll. The bread had a really good flavor. The sandwich itself as a whole was pretty good. The chicken cutlets tasted fresh and homemade. There was not a lot of sauce on in nor a lot of cheese, just enough. 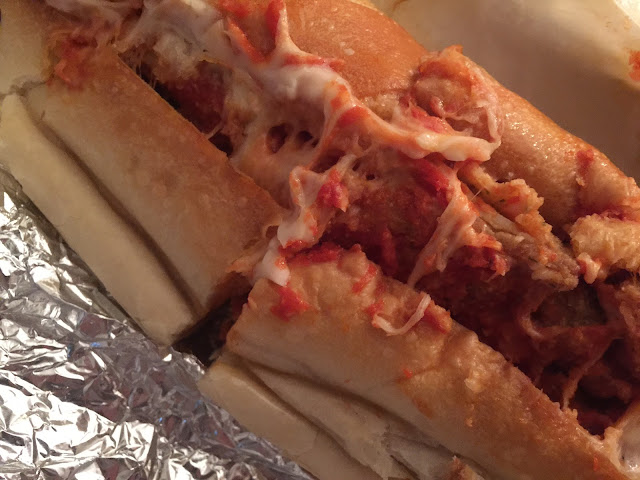 Did I Love it?

So did I LOVE Pizza Love? Yes I did. I would go back to try more. There was so much on the menu and so many plates of sumptuous-looking food being served while I was waiting there that I was tempted to add to my order.

Instead, I'll just go back again.

Pizza Love takes all that is good about classic New York area Italian-American specialties and puts them under one roof. Authentic Italian taste.