New York Fashion Week. There’s not much that matches the excitement of this week in New York. For me, this was my first time.

I got to witness the unveiling of a new line of socially-conscious clothing, called Livari. The lovely and inspiring ladies behind it are Alysia Reiner (actress/producer/feminine activist known for Equity the Movie, Orange is the New Black and Better Things),  Claudine DeSola (Founder, Caravan Stylist Studio and Celebrity Stylist) and Tabitha St. Bernard-Jacobs (Designer of Tabii Just and a Women’s March Organizer).

According to the press release, LIVARI is “a luxury fashion line that was created with the sole purpose of empowering women. It is zero-waste, women-led, women-designed and made ethically in New York.”

“Manufacturing a typical garment produces an egregious amount of waste – up to 15% of the fabric used to make a garment is tossed out and can end up in landfills”, said LIVARI founders Reiner, DeSola and St. Bernard-Jacobs. “By using the remnants from mills and sourcing other unique and ethical materials, we’re able to create something beautiful and desirable out of what would normally be discarded as waste.” 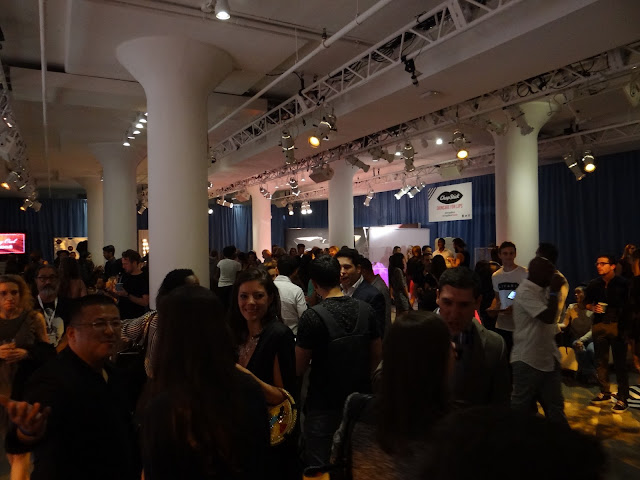 The event was hosted by IVY, The Social University at the KiaStyle360.  The lobby was brimming with people and photographers. Upstairs was the runway. Chocolates by Patchi      was being passed out. Lights  out, music on and the parade of never-before seen styles from this emerging clothing line began. Special guest models on the runway were:  Author/entrepreneur Summer Rayne Oakes, Founder/ Pretty Connected Lara  Eurdolian, Actress Nichole Galicia, Activist Blair Imani, Founder/ShortVersion.com Cleo Abram, and Actress Christiane Seidel.

A highlight of the show was when actress/producer Alysia Reiner walked out donning a stunning dress and carrying an infant. The symbolism was clear, we are stewards of Mother Earth, and we have to preserve it for our children.

There were many different pieces, something for everyone of any age and even size. It seemed that the most-talked about piece was a black mini skirt made of fish scales from South America. People including myself, were walking up to it and touching it. It was very soft, softer than most leathers.

The after party was held next door at Hudson Terrace. Fish tacos, veggies, fries, sliders were on the menu and the music was pumping.

I asked Alysia about the pricing, which she said still had to be worked out, as each piece would be unique. I also asked her about a stunning long silver dress with plastic sequins. She said it was made of discarded material and products. I also asked the price about the black fish scale skirt, as that caught my eye. That is the kind of wardrobe piece that would never go out of style. She said that the production, and hence pricing of that is difficult right now as they are using products and people in South America.
Guests of the show walked home with a black swag bag provided by Brother, it was a reusable bag of course. Inside the bag were products from Chapstick, Beach Babe, Pukka Tea and a fan. 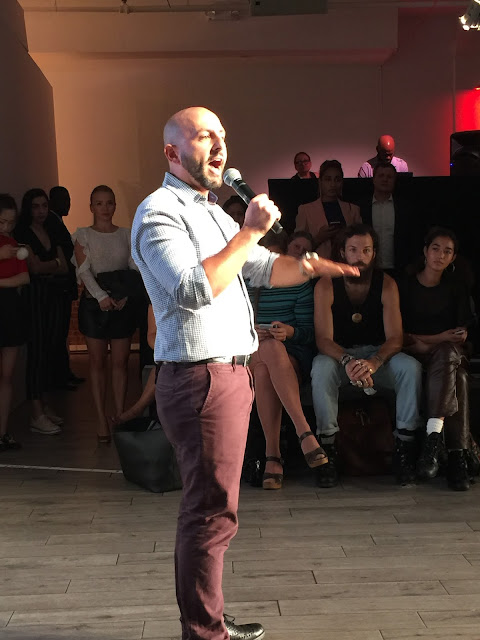 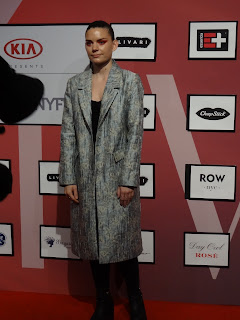