Interview: One of Good Housekeeping’s 50 over 50: Director/Producer Caytha Jentis - After Three Feature Films She’s Now Turning to the Web to Find her Audience for “The Other F Word” 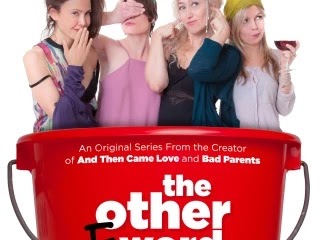 Caytha Jentis, who was recently named one of 2016's Good Housekeeping’s
50 Over 50, is turning to a new medium - the digital world. After her success with three movies, And Then Came Love (Vanessa Williams, Eartha Kitt),  Bad Parents (Janeane Garafola, Cheri Oteri) and The One (Jon Prescott)   and she is now using the Internet to reach a new audience, the growing legions of vibrant, motivated,  women and men in mid-life. “It’s such a terrible term” she adds, but that is what’s used.”

Caytha’s new web series, The Other F Word, focuses mainly around a group of four women experiencing all the joys and pitfalls of life and relationships at this stage of life.It features Comedienne Judy Gold and Steve Guttenberg.  A little Sex in the City-ish plus a decade or so, the characters are likeable, funny and interesting. She believes women, and men will be able to identify with the characters and the stories. You can see more about it at http://www.theotherfwordseries.com/

And if you like what you see, she’s got an Indiegogo campaign at: https://www.indiegogo.com/projects/the-other-f-word-series--2#/ 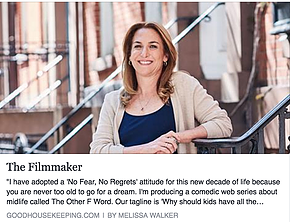 What inspired you to make this series?

I found that turning 50 and having my kids get older was an intense period of dramatic transition for me and my friends.  It seemed that there were shows about women friendships at many of the life milestones and none yet that addressed this chapter of life.  As there are so many people on the web talking about this time of life, it seemed that doing the show digitally was a great way to tell the story honestly and get it directly to our audience. #nofear #noregrets

Why do you think this is still an unrecognized market?

Caytha: Sadly ageism exists in and Advertising and there are a lot of myths that need to be dispelled.

Watch the Premiere of The Other F Word at Bow Tie Cinemas in Ridgwood, NJ 8-31

What did you learn from your past movies that you used in this series?

Caytha: As an independent filmmaker I know how to wear many hats a stretch and dollar and as my films have all been targeted to 'niche' audiences, I have an understanding of viral marketing and that it's no longer produce it and they will come.

What do you think of the Internet now as a place to showcase new projects?

Caytha: The internet is the new platform for fresh voices and independent projects whether long form or short or episodic. It provides a platform for storytellers to get their stories to audiences. That said, there is too much content out there and people's times are that much limited that it's harder than ever to succeed.

Why a series and not another movie?

Caytha: I felt the four women's stories lent themselves better to an open episodic story vs a finite story of a feature.   Each character has a coming of age journey - similar to the young ladies in girls - complete with its own fits and starts that needs the time to unfold.

Tell me about some of the subject matter you want to focus on in this series.

Caytha: I don't want to give away too much about each character's story but I tried to start to pull the rug out from each of their comfort zones as life tends to do.

Why is humor so important?

Caytha: I write absurdist reality based comedy.  I've been inspired by the existentialist whose world view was that we are ultimately all born to die - so you can either become depressed or find humor in it.

In the NYC area? Caytha will be a panelist at the  iRelaunch’s Annual Return-to-Work Conference at Columbia University on 9/29.  For info visit: http://www.irelaunch.com/rtwabout

Never Have I Ever - In a word. Clever. Something teens and adults could find humor in. And if you were a nerdy girl in HS you'll live vicariously through Devi.

If you can afford it, a gift card is a perfect way to say Thank You to a healthcare worker at your local hospital. #CareCardsforCoronaCaregivers

Read on about what the females in entertainment are doing in 2020.

May 2020 - Sharon Hoffman becomes top Producer at Jimmy Kimmel Live..love the home edition BTW...Wendy Williams out for awhile due to health issues...Rest in Peace Lyne Shelton and thanks for your direction and mission...Good Girls renewed at NBC...A Little Late with Lilly Singh renewed at #NBC...Sofia Coppola on team for Custom of the Country on Apple...Queen Lattifah's new show Equalizer set for #CBS...April 2020- Amy Schumer do to new cooking show for the #FoodNetwork called #AmyLearnstoCook.... New #DoogieHouser in the works with a female lead on #DisneyPlus...

Gossip Girl Spinoff coming to HBOMax....Greta Gerwig and Noah Baumbach writing new script for #Barbie starring Margot Robbie... Taika Waititi to direct next #Thor Movie with Natalie Portman as Thos... Demi Moore- remember her when she was on #GH?...coming to #BraveNewWorld series on USA Network..

As a THANK YOU to our readers, we're giving away TEN $20 Gift cards to Amazon or Target in the months the of March. Winners will be announced on July 4, 2020. All you have to do to win is enter your email in below - as winners will received E-Gift cards. There is no obligation whatsoever, your name will not be mentioned and your email will not be shown to anyone but us.
Winners will be notified by email. You can only apply once. Good Luck! In the message, please write "Giveaway" or tell us your favorite movie!

We're Changing Our Name and Look!
SuzeeBehindtheScenes is becoming BehindtheScenezz.com! We are feverishly working on a new design, new features and migrating content over for a new reader experience. Our new look is on target for late 2020. We will continue to provide the same content, but with a slightly new emphasis. Expect more movie and NYC/NJ event reviews, especially from a female perspective as well as more stories and interviews about inspiring females in entertainment and beyond.
Got an idea for a story? Let us know at
SuzanneOrdasCurry@gmail.com
Staff Writers:
Senior Staff Writer Beth Abramson Brier
Connor Moriarty
Grace Manzo
Kelly Byrne
Julia Colucci
Ashton Samson