The Red Carpet was abuzz with excitement as Equity, billed as the first female-driven film about Wall Street, had two screenings at the 2016 Tribeca Film Festival in New York City. Equity is the story of Naomi Bishop, a female investment banker played by Anna Gunn (Breaking Bad, Chunk and Bean), who takes a privacy company, called Cache, public. In this tech-thriller the ambitions of these highly-competitive Wall Street bankers collide to create a complex story full of unexpected twists and turns emulating the real dealings of a world in which power and money supersede all. Unique to this movie, the main movers in this movie are the women. It was also directed by a woman, Nora Ephron Prize Winner Meera Menon.


The film was the brainchild of and produced by Alysia Reiner and Sarah Megan Thomas' Broad Street Pictures and sold to Sony Pictures Classics before its premiere at Sundance 2016. The majority of the films' producers and investors are female, and include many female investment bankers which lent their expertise to the content of the movie. 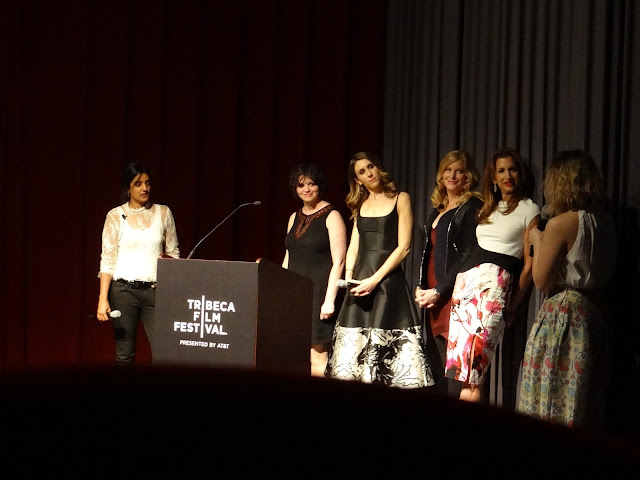 Asked about the genesis of the movie, Alysia responded, "It was Sarah's idea, she came to me with this idea of a women on Wall Street, but that didn't exactly touch my heart. But then, I talked to people....and was so moved by all of their stories, and they were so similar".

Sarah added, "Living in New York City, many of my friends are Wall Streeters, and I'm very impressed by them, by their intelligence, and their power. And I love Wall Street movies. I always watch them, and I'm like "oh, there's a woman in the background.. but where are all the others?" So I just wanted to tell a story about all these other women."

Screenwriter Amy Fox talked about how she developed her characters. She said,"You're not going to create the perfect Wall Street woman because there is no such thing." I spoke to a lot of women... and collected their stories so that I was able to create three very different women. And that enabled me to cover all the gray areas.. so that just Naomi didn't have to carry the main message."

Anna Gunn was asked about why she chose to do the movie. "I"m just drawn to good writing," she said. "When I started reading it, I couldn't put it down. I love the grey areas. I like the fact that there are so many different shades, so many colors, so many nuances to what is going on.

She added, "And when we meet Naomi (Anna Gunn's character), she'd been a winner for a long time, she hit the apex, and she's just starting to fall."

Anna also talked about how she prepared for the character. "The research for this movie was just incredible," she stated. "Talking to Meera, Sarah and Alysia, and our investors.. our inspiration for the movie, that was an incredible process. It was a day and a half, an immersion, meeting people from that world."


Director Meera Menon talked about females roles in Equity. "These are complex characters," she states. "It's not necessarily assigning one idea around any of the character." She adds, "That's where the story steps off the screen, how we look at females in positions of power, It's a particularly relevant time for that."

After the Q & A, as part of Tribeca Talks, there was a panel discussion with Equity director Meera Menon, Mary Harron (American Psycho) and Jennifer Westfeldt (Friends with Kids).   Come back to www.SuzeeBehindtheScenes.com for more on this discussion.

The movie has a scheduled release date in New York and LA on July 29th, 2016. It will also appear opening day at Bentonville Film Festival 2016.

For More Photos of Equity at Tribeca:
http://www.suzeebehindthescenes.com/2016/04/equity-film-at-tribeca-film-festival.htmlhttp://www.suzeebehindthescenes.com/2016/04/equity-film-at-tribeca-film-festival.html
Story/Photos By Suzanne Ordas Curry
Email ThisBlogThis!Share to TwitterShare to FacebookShare to Pinterest