Review of Winterthorne: Wonderfully Wicked and Entertaining: A Web Series To Watch 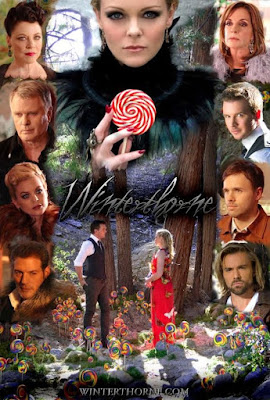 Like most people of my generation, (I am not a millenial) I am not used to watching web series. I'am a soap gal. And a TV gal.

But I am being enticed to the Internet because of all the soap people populating these shows.

Knowing some of the people involved in a new four part series, Winterthorne, I decided to give it a look.

It takes a bit of a change of habit to start watching web series. If you're like me, and you're used to watching TV at night, shutting off that TV (unless you are viewing it on a device) and using your computer like a television takes some planning. I decided night time after prime time was time for web viewing.

The thing about turning on a computer to watch a show is the distractions. A boob tube is just one screen, and you have to switch a channel to get distracted. So watching a web show takes some concentration. Email is just one click away.

I couldn't wait to see what Winterthorne was about, Being a fan of Days, it was great to see Martha Madison, Kristen Storms (the two Belles) together and Kevin Spirtas. Wonderful seeing Linda Gray and Gordon Thomson as well from two night time soaps I watched back in the 80's.

I was impressed when I turned it on. The opening graphics were great and pulled me in. Overall, the quality of the production shone through from the get-go.  I have seen other web shows and lighting and sound is not always perfect. Winterthorne had quality lighting and quality sound, as does Michael's other production, DeVanity.

The sets and scenery were also high-class and polished. They fit the story line, they changed (unlike shows where the show is set in one place and that's it pretty much) and but they used the color in unique ways to keep the viewer enticed,  engaged and not bored. At times I was distracted looking at the candy on the table and trying to figure out what it was (no chocolate, though). The directing ( by Sonia Blangiardo) was superb as well. I followed the story rather easily (after I got used to the flashbacks), and each scene left me wanting for more. 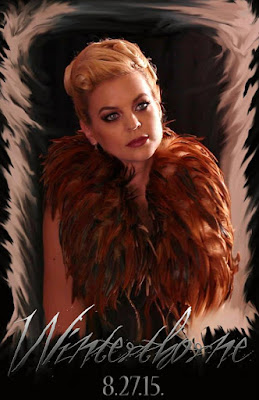 The costuming was a visual pleasure. Martha's feathered, power shouldered- frocks were unusual and intriguing. Makeup and hair was also upscale. This had to be fun for Martha to get dressed up and decorated as she did.

As far as the story goes, this was not a simple plot and a lot of background had to be told so it took some time to set up the story, but it was done well and it was understandable.

The premise of the show is set around a family of women, the Winterthorne women, who discovered a plant in a forest many years ago and built an empire around it using the unique plant in candy. I won't say more about the properties of the Winterthorne plant because the series requested no spoilers, but needless to say the plant has more than just some phytochemicals and folic acid in it.

The storylines and dialogue fit the premise of the show. There was a soapy aspect to it flavored with the fantastic, but then again isn't that what soaps and entertainment in general is all about?

There was just one part of the storyline that I questioned for believability, and that was about Miranda Winterthorne willingly drinking a potion she was given. Other than that the show was logical and believable for its premise.

I watched all four parts over the course of three days. I began looking forward to it each night. I did have some computer problems so I ended up watching some parts over again, but overall the show loaded well and the sound was great.

If you have some extra time between bingewatching  TV and the streaming shows, I would make some time to watch Winterthorne. Soap fans and fans of drama may like this. If you spend your time watching CSI this may not be your bag of candy.

And who knows, you might get hooked on the web. There's a whole lot out there to discover.