Review of Disney's Cruella: Just Pure Fun and Entertainment with Astounding Performances by Emma Stone and Emma Thompson and Lest Not Forget the Costumes are Works of Art 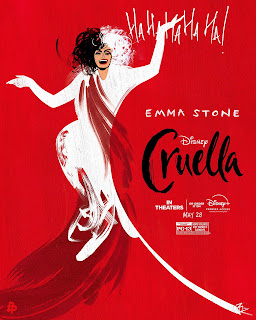 Cruella, the new film by director Craig Gillespie, is witty, glamorous and dark, showcasing the phenomenal talent of Emma Stone and Emma Thompson. It’s definitely a fun time for all. That the film is pure fun and not really much else is essential knowledge to gain before heading into it.
There is certainly nothing overtly philosophical or thematically relevant to discuss with this movie. If someone is looking to watch a movie with social or political undercurrents, with metaphors and symbolism ablaze and an underlying message at its core, Cruella is not for you. I suppose a case could be made for the point of the film being about how to create sympathy for an antihero, someone who has none of the conventional aspects of a hero in place and yet seems destined for heroic status. However, it is best not to read into it too much. Movies don’t always have to be deep or philosophical because sometimes, it's just as entertaining to sit back and have a good time.
A great deal of what makes Cruella so much fun is witnessing the power struggle between the title character, played by an entrancing Emma Stone and the baroness played by the always reliable Emma Thompson. Watching two remarkably talented women attempting to one up each other throughout most of the runtime has never been so deliciously riveting and captivating.

Additionally, the decision to merge the world of the classic Disney movie 101 Dalmatians with the 1970’s and 1980’s London fashion scene was a great one. Fashion and Cruella de Vil have always been synonymous with one another, so of course, the two worlds blend together brilliantly. The emphasis placed on the character’s adoration forfashion design allows the audience to revel in what are genuinely some of the most breathtaking, cutting edge versions of couture. Each outfit is a museum-worthy work of art in its own right and is one of many aspects that elevates the movie from a generic Disney film to a mature piece of work that can be taken more seriously. 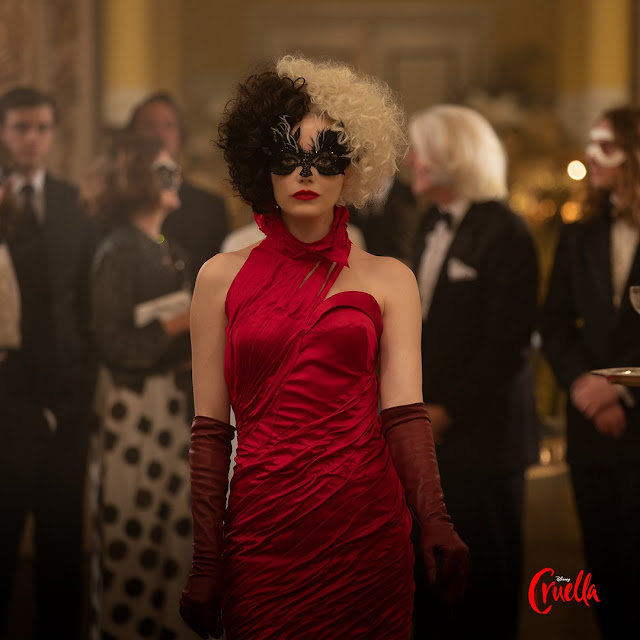 Credit must be given to Stone and Thompson, who, in their respective roles, give some of their best work. Both are obviously having the time of their lives, so much so that they quite literally personify their roles to the degree that one can’t imagine anyone else playing these characters.
Stone clearly finds a great deal of joy in spewing almost incessant insults while donning couture and calling everybody "daaaarling." She is able to capture a vast array of emotions throughout the runtime. At one moment, she may be the artsy, relatively hard-working girl who is trying to get somewhere with her life and then, in an instant, she’s the Cruella we all are familiar with. There are many sides to the character, as we learn, and Stone does justice to them all, shifting from one to the other with ease. She is what makes the movie what it is. In fact, I am uncertain as to how good the film would be without her almost constant presence.  She is simply fabulous.
You May Like: Ashton Reviews Knives Out:
https://www.suzeebehindthescenes.com/2019/12/movie-review-knives-out-is-sharp.html
Thompson is just as convincing in playing a ruthless, utterly merciless human being. It is certainly interesting to see her in a role such as this. Instead of playing a virtuous, dignified heroine in films such as Howard’s End and The Remains of the Day or turning in roles as a Shakespearean actress in Much Ado About Nothing or Henry V, she portrays what may be her first villainous character. It is relatively new territory for her and I’m happy to report that she so effortlessly slides into the role that you feel as if she has been playing an antagonist for ages.Cruella the film is certainly not without its flaws. The runtime of the film is definitely questionable.  While I happen to enjoy longer films overall, some movies seem to lose their way in the middle and would benefit from the removal of distractions that do not add to the storyline. This is the case with Cruella. I can’t help but think that some of the earlier scenes with the younger Estella or with Stone before her transformation could have been shortened so that we could get more time with the fully transformed Cruella.

Additionally, when the film arrives at its finale, a great deal of vital exposition is thrown at the audience in a dizzying manner, that instead, should have been more gradually revealed. Much of the lead up to the fabulous ending feels like an overwhelming amount of information that, in replacement of some of the earlier parts of the film, could have been scattered throughout. There are instances where not everything is logical or structurally accurate.
Of course, there’s the point that, in the end,  Cruella is just pure fun. If you analyze it too much or look for a statement, you’ll be disappointed. If people listen to this advice, they’ll realize that the marvelous acting, magnificent costume design and fantastic power struggle at its center are all that is needed to make this such a fun, entertaining film.
Ashton's Rating:
3.5/5 🌝🌝🌝🌛
Follow Ashton on Twitter: Ashboomstick@Ashboomstick2
To keep up with all of Ashton's Reviews: Follow us on Facebook:
https://www.facebook.com/BehindtheScenezz
All photos in this article courtesy of Disney's Cruella Facebook Page
Email ThisBlogThis!Share to TwitterShare to FacebookShare to Pinterest
Newer Post Older Post Home