Review of Love, Wedding Repeat on Netflix: Is it Good Enough for a Repeat Watch?

Now is the time we all need a little rom-com to perk up our lives.
Yesterday was the premiere of Love, Wedding, Repeat on #Netflix and I was first in line. This UK/Italian joint venture is about the marriage of an American woman (Eleanor Tomlinson) marrying an Italian somewhere in Europe in a magnificent castle in the summertime. You get to know her brother (Sam Claflin) who is quite the ladies man, the maid of honor (Joel Fry) an aspiring actor, and the girl that got away from the brother (Olivia Munn). There's also an assortment of other characters that play into the drama including a Hugh Grant-type character (Jack Farthing), the guy pretty much any woman does not want to sit next to at a wedding (Tim Key) and the brother's ex girlfriend (Freida Pinto).  What goes on at this wedding which is pretty much the whole movie. But that's okay, we love weddings.
I always hesitate to read reviews prior, or even before writing, because I don't want it to change my gut reaction of the movie. As far as romcoms go, I would give this about 4 heartbeats out of 5. It checked off a lot of the boxes: 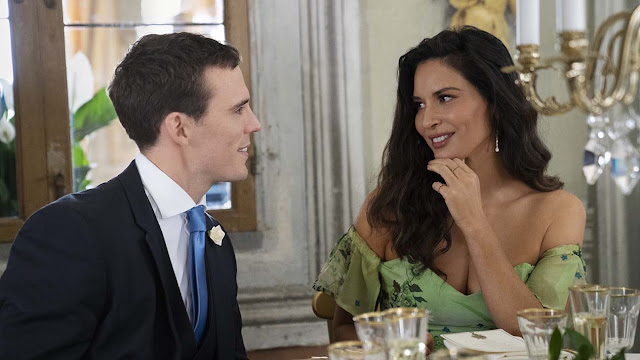 Overall, the actors did a great job, were believable in their parts and the art direction and scenery in the movie kept my eyes glued to the screen. There were also so many plots and storylines that you really had to keep up with what was going on. The pace was good. I would say it never dragged on, except the twist came later in the movie than I had thought it would. I also appreciated the classic music.

The only reason I would not give this five stars is because I rather thought there was going to be a really unique angle to this. Spoiler here- there are two endings to this movie. One doesn't really know which was the real way that it ended, and of course I prefer the second. The concept was unique, and I think the writer had fun. He/She got to put two different endings in for the same bunch of characters.
I would recommend #LoveWeddingRepeat to any fan of romcoms: 💗💗💗💗 out of 5.  And in response to the title, I would watch it again.
Email ThisBlogThis!Share to TwitterShare to FacebookShare to Pinterest
Newer Post Older Post Home