Movie Review of Poms - A Star-studded Film with Diane Keaton, Rhea Pearlman and more, but is it Something we can Cheer about? 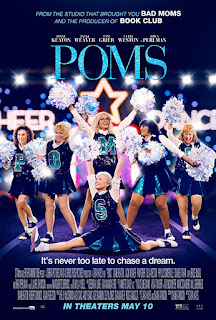 Review of  Poms the Movie by Beth Abramson Brier

Gimme a “P”!  What is it about cheerleaders? With all due respect to my youngest sister who was co-captain of her high school squad, is there any other symbol of high school more dreaded than pom poms? And yet I had high hopes for some good laughs and sheer fun when I purchased my ticket to see the latest Diane Keaton movie, Poms.

In this “women of a certain age” movie, a rather gaunt Keaton plays Martha, a former teacher with seemingly no family who suddenly moves to a retirement* community in Georgia to wait out her final months of ovarian cancer. Not an auspicious start for a comedy.


Unable to fit in with her pastel clad cohorts, Martha’s new neighbor Sheryl (Jacki Weaver) convinces Martha to live out her unfulfilled teenage dream and form a cheerleading club right there in their gated community. And, of course, like any self- respecting cheer team, they hold tryouts. Watching Alice (Rhea Perlman) audition I could only cringe in horror thinking “OMG! Is that what I look like in Zumba class???” I nearly cracked a smile when Olive (Pam Grier) shimmied her way onto the roster. But I didn’t outright laugh until Sheryl responds to a mean girl cheerleader’s “break a hip” jab with “get pregnant”! Aren’t writers brilliant?! (Did I mention this takes place in Georgia?)


It’s not giving much away with this predictable title that, despite the challenges of their aches and pains, doubting children and jealous neighbors, the team comes together and carries it off. The film relies on a talented cast and well-worn themes of friendship, courage and spirit but surprisingly no strong male role or love interest. (Would even a small cameo from Keanu Reeves have been too much to ask?) The critics have not been kind to this film but I have a soft spot for Diane Keaton.

The movie got me thinking. I don’t have a bucket list and when I finally write one cheer leading will not be on it. But pom poms? Maybe pom poms.