Review: NJ's Paper Mill Playhouse Presents The Outsiders Starring Julia Duff: Time to Laugh About Politics But Who the Heck is Ned Newley? 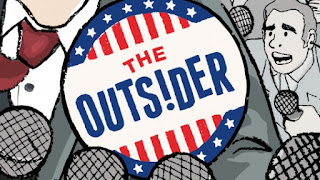 I am all “atwitter” about the hilarious new show, "The Outsider” on stage at Papermill Playhouse in Millburn, New Jersey, through February 18. Playwright Paul Slade Smith’s east coast debut is nothing less than brilliant. Finally something to laugh (and laugh and laugh) about, something to cheer for and something to stand for. Never did I expect this from politics in 2018.

The play opens with Julia Duffy (Newhart, Designing Women and, more recently, Shameless) as Paige Caldwell, a political pollster, talking with Dave Riley, the Governor’s Chief of Staff played by
Manoel Felciano (Tony nominated for “Sweeney Todd”). While it is true that Smith provides the uproarious dialogue, Duffy’s on-stage comedic genius is her nuanced facial expressions often missed
on the small screen.

It’s “Political Science 101” as they consider the fall-out from the former disgraced Governor Clark who was forced to resign after a sexual scandal involving a beauty contest. (With a runner-up, no less.) Gasp! The shame of it all! It’s a “shanda” all right.*

The fast-paced first act is all about strategizing to get the awkward and uncharismatic interim Governor, Ned Newley, to win the special election. Lenny Wolpe delivers an endearingly funny performance eliciting both laughter and applause. A Papermill veteran, Wolpe is “that actor” you recognize from nearly 100 guest appearances on television. Enter political consultant Arthur Vance (who, among his credits, created the role of Gaston in Disney’s smash “Beauty and The Beast”) who is determined to make Newly the of this political reality show.

But it’s Louise Peakes, the secretary from the temp agency, played by Erin Noel Grennan, who pushes the audience out of their seats and rolling in the aisles. Although I recognized Grennan’s face from her recurring roles on Law & Order: SVU, Chicago Fire and Chicago Med it took me a while to place the voice. And then, suddenly, I knew. And I was scared! It was the moment when TV news reporter Rachel Parsons (Kelley Curran) interviews Louise who accidentally becomes a candidate for Governor. She cheerily admits she’s “just like us” and knows nothing about government. Just like us? You betcha! (Is that Russia we glimpse just beyond the set door?)

Good news. Smith gives the audience a chance to catch its breath from laughing in a quiet moment between Newly and news cameraman A.C. Petersen. A.C. (Mike Houston) is the silent voice of the governed and provides Ned the perfect opportunity to deliver a timely civics lesson. It’s sobering and overdue. Hint: It’s not about “impressive numbers”.

My take-away. Politics is serious. Fun. Tell everyone! Tweet it out!  Go see “The Outsiders”!

*Yiddish for disgrace. Write it down! So useful these days!

FOR TICKETS: https://papermill.org/
Email ThisBlogThis!Share to TwitterShare to FacebookShare to Pinterest