RHONJ Dina Manzo has another show on her IMDB profile, a soap. Dina appears in Tainted Dreams, a continuing drama now streaming on Amazon. Tainted Dreams is the brainchild of Sonia Blangiardo, who has been behind the scenes in the land of soaps as a director for decades. Tainted Dreams chronicles the behind-the-scenes happenings of a soap opera, Painted Dreams - and if you think the on-screen happening are interesting there's even more drama behind the cameras.

In her exclusive promo for the show she talks about "how she always wanted to be an actress." She also states how "it's a very different dynamic" versus being on a reality show, when the cameras are following you around. In this show, the Manzo surname is gone. She's a DiGiacomo!


Here's the link for the teaser on Toofab.com:  http://toofab.com/videos/0_aadtpkac

Tainted Dreams was filmed in NYC, back when Dina the Jersey Girl was still living in Jersey. For more on Dina and what she's doing now, follow her on Twitter. 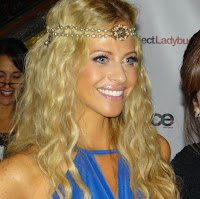 To watch Tainted Dreams on Amazon visit the website: www.TaintedDreams.com

OOFAB.COM
Email ThisBlogThis!Share to TwitterShare to FacebookShare to Pinterest