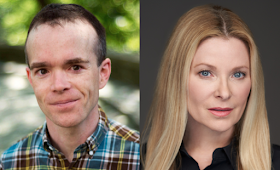 Join Emmy-winning actress Cady McClain, Artistic Director for NY's Axial Theater with Brad Forenza for a reading of four short plays on Sunday, August 28th from 3-5pm. The reading is part of Cactus Flowers, which presents the best of new playwrights. The event is free but donations always welcome.
RSVP HERE.
Axial Theatre regularly hosts a free short play reading series. These readings are for the purposes of play development. Audience participation is encouraged! We are thrilled that Brad Forenza will join us as our Guest Moderator, alongside Axial’s Artistic Director Cady McClain.

Playwrights joining us in August are:

Here’s a little about Brad:

Brad Forenza is an award-winning, New York-based writer/performer. His artistic style blends observational humor and existential contemplation. Brad’s original films include: Awakening Arlene, Breaking Points, and The Lady Yang. His plays have been presented in New York and Los Angeles. He is the author of over 100 articles, editorials, and speeches. Brad’s anthologized publications include: The Public Figure Songbook (a concept album), Regan Babies (a collection of personal essays), and Vignettes (a compendium of short plays comprising Around the Sun, an episodic audio drama). As an actor, Brad has appeared in roles for all mediums. | www.AuthenticallyBrad.com
This event is FREE but we deeply appreciate the support of our community. Please consider making a donation today! Use the yellow button at the top of our webpage to make a donation through PayPal.Axial Theatre Inc. is a 501(c) (3) not for profit organization. Any donation is tax deductible to the extant the law allows.